Archive for the ‘ New Bug! ’ Category

A couple of weeks ago, on the 17th, a Wednesday, I believe, Henrietta had a visit from Darnell, her P.A.. She came out to see her because I had begged asked her to since she was turning into such a shrew and cried, (multiple times), almost everyday  about… who knows what.

So Darnell shows up and visits with H for a good while. Asks her all kinds of concerned questions, listened patiently to what I’m sure felt like dozens of stories about things that happened 40 and 50 years ago, and I finally decided to rescue her and went on in H’s bedroom.

I plopped my happy ass down on the bed and we discussed all the goings on of late. H was sitting there watching and we were talking loud for her to hear. I said she needs to be on an anti-depressant and Darnell agreed, whipped out her drug book and commenced to look up the perfect concoction for H.

Lexipro. OK, great. She’s taken it before, a few years ago, and it worked just fine. So she sat there and wrote out a script for it and handed it to me. I went to great lengths to get that rascal to the pharmacy that day and John picked it up on his way home.

I took in her pills that night. One in each little pill giver cup because she insists she can only take one at a time and will drop the pill or the cup or anything else close to her if she has to dig one of the two pills out of a solitary cup to take it. So here she is with three cups instead of two. OH MY. Her eyes grow big. “Krissa, what have you done?” She’s peering into the cups and sees that there are two little white pills, (her Ativan and now her new Lexipro pill), and a little brown stool softener in the third, as per normal procedure.

“I can’t take two Ativan’s Krissa! I’d overdose!” Looks at me accusingly as if I am trying to kill her.

“No, Henrietta, this is the new pill that Darnell and I were talking with you about today.”

“It’s an anti-depressant, remember? Because you keep crying.”

“NOOOOOOO, Krissa! I don’t need that! You tell him that I won’t take any of his drugs!”

Of course I immediately know who she is talking about, but act like she is off her rocker. Which she clearly is, by the way. Don’t think that this has escaped my attention.

“Who are you talking about, Henrietta?”

In a conspiratorial whisper, “Gilbert!”.

And we did. Round and round. I finally convinced her to take the damn thing and that Darnell had prescribed it right there in front of her. She just kept saying that she thought I was getting a refill on her Ativan.

So she took it and the next evening told me that she had had a stomach ache the whole day that day and she just couldn’t take that pill. It didn’t agree with her digestion.

I have been mashing it up in her oatmeal every day since then and the difference was amazingly fast and remarkable. She has completely stopped crying and is so much nicer! She makes no bones about hearing all sorts of voices that she says are Gilbert and he is always doing things he shouldn’t but she no longer sits in her room yelling down the hall all sorts of things to Gilbert while John and I are trying to sit in there and watch a movie. For the two hours(ish) that John and I sat and watched The Blind Side the other night before the new pills were working, she sat in her room and yelled all kinds of things at Gilbert and just generally made the movie watching an unpleasant experience. No amount of visits to her room to tell her Gilbert wasn’t here and hadn’t been all day made a difference. And yes, I know what you’re thinking. I asked her to let me push her into the living room and see. Multiple times. She wouldn’t have it. And she wouldn’t shut up.

She’s still nutty as a fruitcake, but no longer is as paranoid. She’s happier and easier going.

Last Saturday I was changing the third of four shitty diapers she would have that day and, out of the blue, she said, “Krissa, does John have BM’s?”. Swear. To. God.

I was a bit stunned and waited for her to complete the sentence with something like, “on a regular basis?”, or “every day?”, or something like that. No, she just wanted to know if he has them. Period.

She waved that away like it was rather unimportant and said, “Well, yeah, but he doesn’t eat, anymore.”.

So I told her that of course he ate. He’d be dead if he didn’t eat, and she just looked at me like she was trying to determine if I was lying or not.

I called John later and told him what she had asked me and he about fell over laughing. He told me I should have told her no, he stopped having them months ago.

That is something he would have definitely done. 😉

And in the really BIG news…

Keelan has been saving money like mad and has bought her first car! It is adorable, and I got to drive home from Buffalo, Texas with her in it. She found it online up in a town close to her Nana and Pop’s house in Decatur, (Mither and Pop), and they went and looked at it and drove it and what not and she took care of the down payment over the phone with her bank card and all that. Then the dealership Fedexd the papers to her and she signed and sent them back.

It was all very slick and went without a hitch. Mither and Pop drove down to meet us about half way in Buffalo and she was so excited she was beside herself.

Now tell me is this not the perfect little car for a teenage girl? 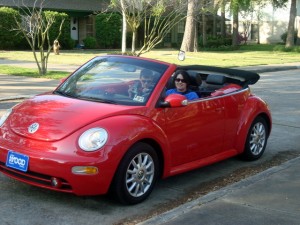 Here she is with her boyfriend, looking like The Shit! 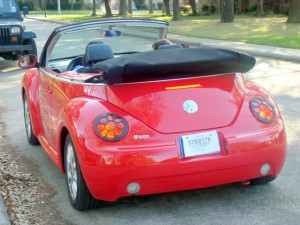 Just as cute going as coming!

Now, how’s that for adorable? 😉