Archive for the ‘ Mither and Pop are here! ’ Category

I know it’s been a while, but I’ve dreamt up some whopper excuses

First off, I actually did repaint both bathrooms. OK, right that only took a couple of days and Mither was down here helping. BUT, both bathrooms were in such disrepair I had to house a lot of peace corps people in order to carry out the make over. Yeah. That’ll be a good deal of my excuse right there. Cause I couldn’t just kick them out as soon as they painted my bathrooms! I mean what kind of jerk would do that? They were going to deploy to…. Bosnia in a week, so I let all of them hang here until time to leave.

Are you having a hard time swallowing this?

What I need here is a touch of evidence. Here are some bathroom pics!

Behold, BEFORE! Go ahead, click on it and make it BIG! 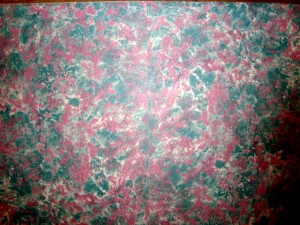 Master bathroom 80's wallpaper BEFORE the paint job. NOW you see why The Peace Corps was needed.

Now stop that! I know you can control your gag reflex better than that! You’re being a sissy! Only a few of those Peace Corps folks tossed their cookies. And there were 45 of them staying here, remember!

Allrightythen, moving right along. I’m guessing you are  now wanting some eye relief. Let’s try showing some improvement, but not quite done. 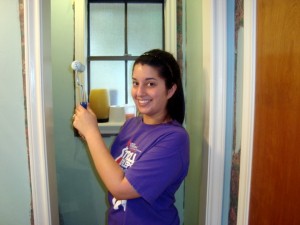 This is the loverly Kessa. She was a tad upset with me cause she didn't have any make up on. I know... I can be decked out to the nines and sporting a tiara and not come close to looking like that.

SEE! Isn’t it a beautiful shade of blue/teal or whatever it is? Talk about “lighten and brighten”! That’s what we did! 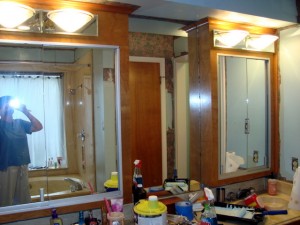 Here's the mess aaaaall over the counter. There is so much mess you probably can't even see the Peace Corps workers in there doing their thing. 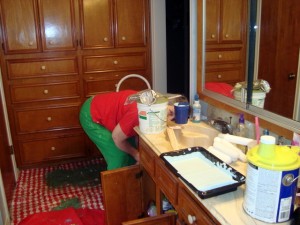 Here's Mither bent over painting the wall behind the counter. I realize you can't see that much of her, (go with me, here), but she's peeking out between that bucket of joint compound and blue plastic cup of paint. 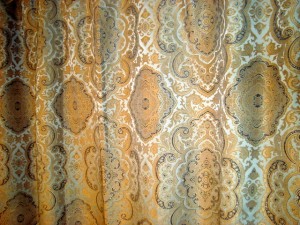 Here's a close up of my new shower curtain. I got it for six bucks at a garage sale and so the bathroom color was picked around it. SCORE! 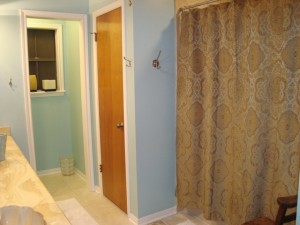 This is a really great shot except that the paint is so totally NOT that color. I really did have a hard time getting pics that represent the shade of blue/aqua/turquoise/greenishblue... 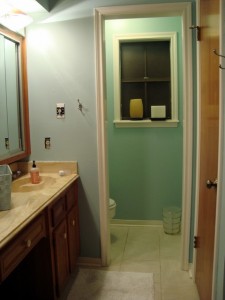 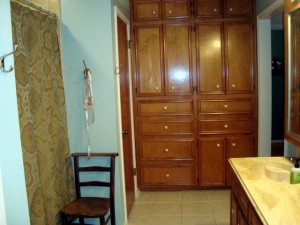 Here we are, still needing bath mats down and towels, but doesn’t it look fresh? You have no idea how much brighter it is in there! 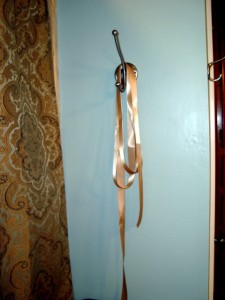 Doesn't this long piece of ribbon look pretty with my shower curtain? I wish I could figure out something to do with it in here. 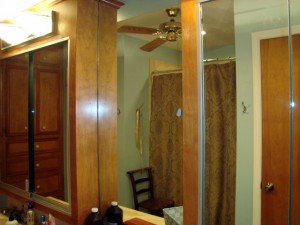 It's hard to stand where I can get a good shot. Here is a look at the mirrored side, so you can see the reflection of the other.

Now, this has been so long and I have taken so much time to do it that the girls bathroom, upstairs, is going to have to be another post… I have to go… I am a volunteer firefighter and there is a raging skyscraper fire in downtown Houston that I am going to be airlifted to. Yeah. That’s it. 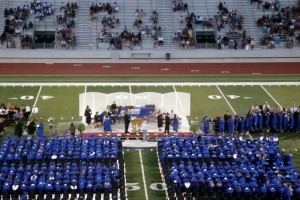 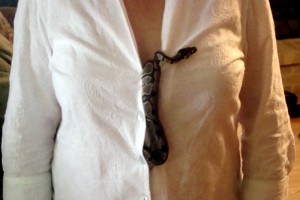 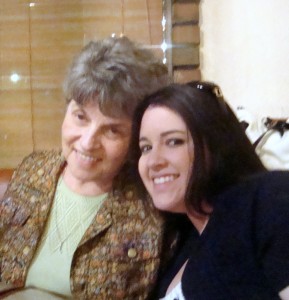 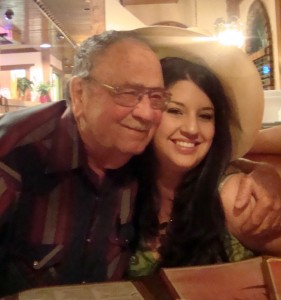 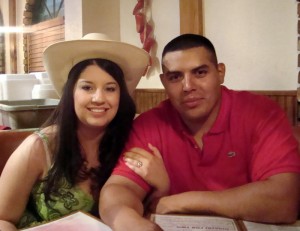 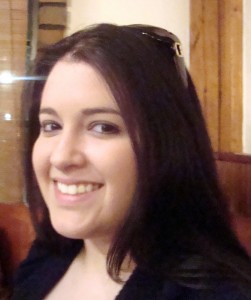 Hi there, gang!  I have really been out of pocket for a while and am sorry about that.  I know I am a couple of days behind on reading blogs as well, but I plan on making that up soon.

Child b. is due to graduate tomorrow evening beginning at 7:00.  Her Nana and Pop are down here for this auspicious occasion.  Her great aunt, Auntie-poo was supposed to be here also, but wasn’t able to come. 🙁

I won’t lie to you, we are also celebrating Witchypoo’s birthday.  She has alluded to the fact that it is a “milestone birthday ending in 0”.  She never said how many 0’s…? 😉  Heh.

My house is as clean as it has been in a very long time without being dusted yet.  Floors, spotless.  I got a new Haan steam mop for my birthday that I have been wanting.  Or maybe it was Mother’s Day… I forget since they were one day after the other this year.  Karen over at The Rocking Pony filled me in on it and she loves hers.  I can see why.

Aaaannnnyyyyyway, I love it and all my floors are clean with a minimal amount of effort and bother.

This is starting to sound like a commercial for Haan.

In the morning the graduation girl, Keelan, her sister, Kessa and Mither and I are all going to eat breakfast at La Madeleine.  Both girls really love that place and it no longer feels like John and my secret place.  That’s what I get for spilling the beans about how good it is.  Anyway, all three generations will be there and it should be lots of fun.  I am really, really looking forward to it.  I will take pictures, I promise!

Boring post?  Tough shit, it’s five minutes after midnight and I am tired and can’t form comprehensive sentences.  Much less bring to mind any of the FASCINATING crap that has happened to me of late.