The Peace Corps workers have all left for Bosnia, but not before helping me with the upstairs bathroom makeover

Well, of course I didn’t forget that I was going to show you the upstairs bathroom! The Peace Corps, dear Mither, Kessa, and I are finished and there has been a HUGE improvement.
Behold: 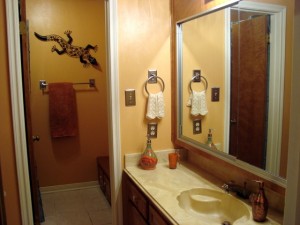 The gallon of paint was an extra Mither had from some project she was doing at her house. It was a color that the girls didn’t really like. Kind of a soft creamy yellow. It was also a high dollar Sherwin Williams paint, so we took it up to their mixologist and he fooled around with it until he came up with this shade. I call it Orange Sherbert. The girls liked it. And when you consider it was covering an 80’s wallpaper that made the paper in my bathroom look current, we were tickled pink.

It sucked every ounce of light out of those two tiny little rooms. I think we expanded the space by several thousand square feet. (My rough estimate.) 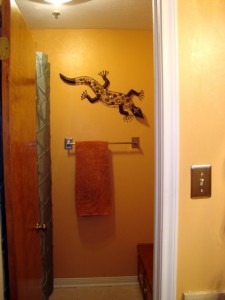 Here we are looking into the part where the tub is. That’s Henry on the wall. Why did they name the lizard a boy’s name for a girls bathroom?

I suppose the better question would be why is there a lizard in their bathroom?

What can I say? I felt a connection. 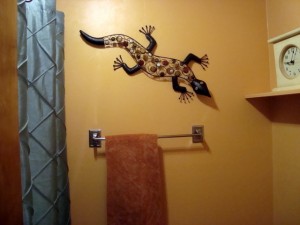 Henry’s closeup. I don’t want to freak you out by getting too close… he’s sticking his tongue out. He has a bit of the sass. 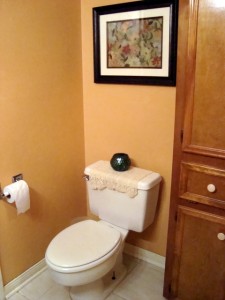 And, of course we have to have a shot of the pot. Note the Pretty Potty Picture! 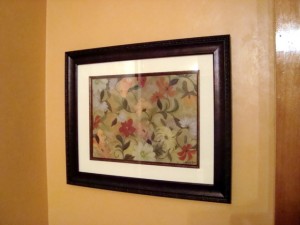 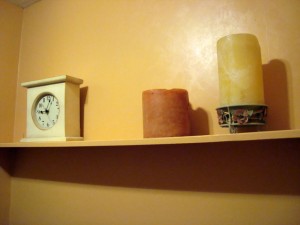 This is a shelf adjacent to the wall Henry is on. The clock is an old one I hauled out of the closet and replaced a truly horrid large blue fish with a clock in it’s belly. Yes, just as tacky and juvenile as it sounds. 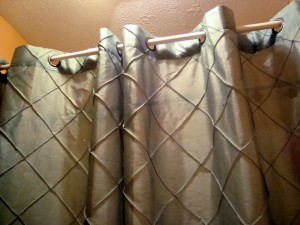 Here’s their new curtain for the shower. Actually it’s two curtain panels instead of a shower curtain. The old plastic liner is behind them and still hanging by the fish shower curtain rings… need to replace those.

That is as far away as I could get to take the picture. We either need larger bathrooms or I need a better camera.

Well, there you go! You have been witness to another HalfAsstic makeover.

Next? I paint the utility room.