Well, today was the day I returned to the house of horrors for my two fillings.  This all went down without a hitch and I also got a cleaning again although, it wasn’t as involved or heavy duty because I had just had one a little over a month ago.  Anyway he shot up my mouth with Novocain and drilled and filled and sent me outa there.  I got home and ran around with John a bit and eventually looked in the mirror when everything was starting to wear off and I have a half dollar sized bruise on my cheek!  This has never happened to me before and I don’t know of it happening to anyone else.  My doc is a very gentle dentist and wasn’t in a rush or anything.  I was completely aware of everything that happened, but on the side he was working on I have this large blue bruise.  My kids keep making fun of me and telling us that “Dad finally got tired of the lip you’ve been giving him and belted you one.  (hysterical laughter)”  I assured them that if that was the case I would have been dead years ago.  Yet they persist. (They, clearly, don’t know on what side their bread is buttered.)

This reminds me of a similar incident that happened years ago that should have made John very uncomfortable to be seen with me in public.  I know I felt more than uncomfortable.  I, for no apparent reason, out of the clear, blue sky, got an incredible allergic reaction to….something.  We never did figure out what and believe me, if it had continued to happen I would have had ALL kinds of tests done.  It happened during March one year and wasn’t that severe and then in April the next year it came back and I thought I may as well be dead.  It was a full blown HORRIBLE allergic reaction that made Michael Jackson look pretty damn cute in comparison.  My whole face blew up and except for actual discoloration from bruising, I looked like someone had beaten the holly hell out of me.  I looked ridiculous.  I applied HUGE amounts of makeup and did up the eyelashes…  No.  Nothing was going to detract from this.

John swore he wasn’t embarrassed to be seen with me and I assured him that EVERYBODY thought he had beaten me.  No.  He didn’t care.  But I did!  It was so strange to see all these people looking at me with so much pity.  The same way I might have looked at someone that looked like me…

It only lasted a couple of weeks and slowly went away.  I cried it was so awful.  I remember thinking I might always look like that.  It was a truly BAD time of my life. 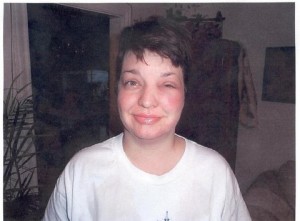 OK.  Here I am in aaaall my glory.  You’ll have to excuse the hair and nightshirt, but other than that, it’s almost as bad as it got.  And I was trying HARD to open that left eye for this picture.  And I was SMILING.  Can you tell?  No need for collagen injections here!  My lips were HUGE!  While one eye was swollen shut the other had this huge, unusual bag under it.  I had…something collecting in spots all over my face.  I remember calling the allergist and CRYING to the receptionist over the phone that they HAD TO GET ME IN THERE.  They did and I got a shot.  The first thing that happened is my face started getting narrower, then it all started fading and I finally looked human again.