Archive for the ‘ Painting the front door ’ Category

Well, another miracle was preformed while Mither was here to help me out.

The stupid door finally got repainted.

Took about 10 minutes and one sample sized paint can that cost $5.00.

No. I don’t know why it took me so long to do it, except to say I just couldn’t decide on a color. I love red, but the neighbors across the street have a red door and I didn’t want to be a copy cat.

Yet, I really do love mine, now. 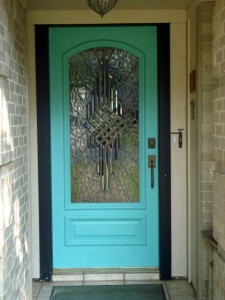 I have to give Mither a lot of the credit. She pushed me into going ahead and doing it. OK, she stood over me until it was done. OKAY! She helped me!

Er, maybe I helped her, whatev. 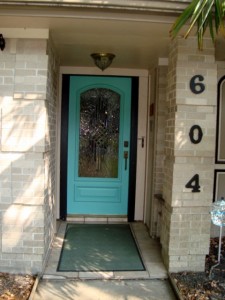 Do you think it’s turquoise because we’re Messicans?

The front door…from the outside.

Hello there.  I would like to start out by clarifying one thing:

When I paint the door, it will only be the outside.  The inside is in great condition and there is absolutely no reason to paint it.  The outside, however, is not so good.  I will take a picture and show you, my speculative intertubers. 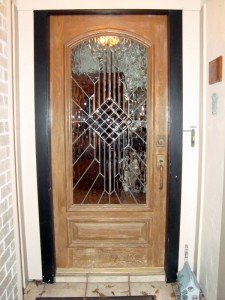 Here it is all peeling and weather beaten.  Not to mention the chick that lives here needs to sweep the porch, but she’s a slacker and let’s not discuss that now. 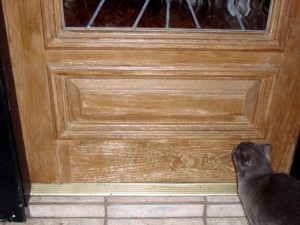 Purrrza wants in and is TRYING to be patient while I snap stupid pictures!  She thinks, “Damn I wish she’d paint this ugly door!  I’m embarrassed to live here and all the neighborhood cats think I’m low maintenance.  BUT I’M NOT!  If I flatten my ears back a little bit more she’ll know I’m really pissed and mean business.  GET THIS *&%$#! DOOR OPEN!” 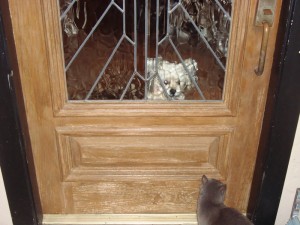 Purrrza: Oh Gawd!  The stupid dog, now… what more must I put up with?  How come she’s inside and I’m out here? 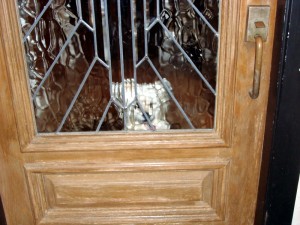 Baby: Momma!  How come Purrrza is outside and I don’t get to come out?  MOM, what are you doing? 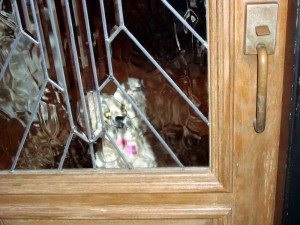 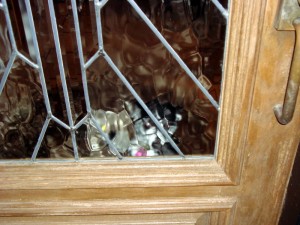 OK, Kissy is here too now Mom and she wants out too… I’m telling you, you don’t want us to call the union!

And lastly, just because it’s hanging on my porch and I was out there anyway I took a picture of this plaque that my brother and sister-in-law gave to John and I a few years ago for Christmas.  Does anyone recognize the quote and know from where it came? 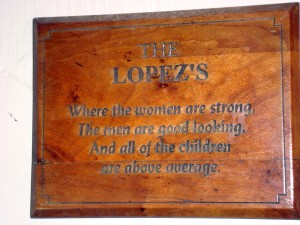 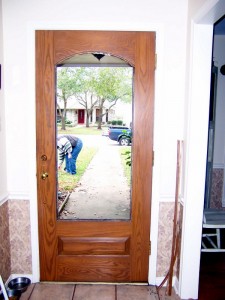 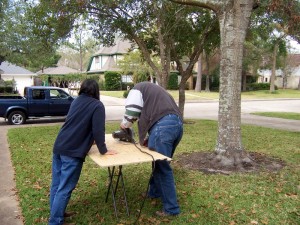 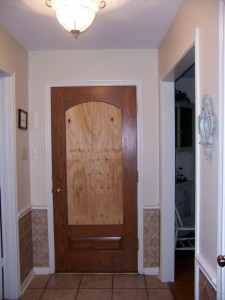 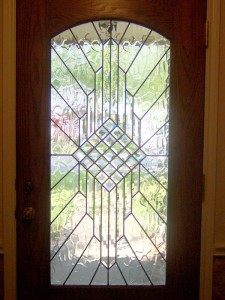 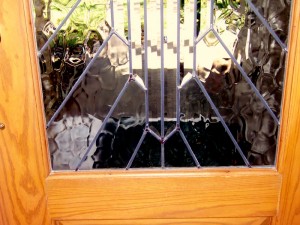 More on the front door color…

Good news, well, for me, anyway!  Mither and Pop are coming to visit for a few days!  They are coming tomorrow and I really should be cleaning house right now.  I am going to have to get high behind here shortly.

Plus!  Nana will help me come to a firm decision about what color to paint the front door.  Here are more picture’s of paint swatches just to further confuse everybody. 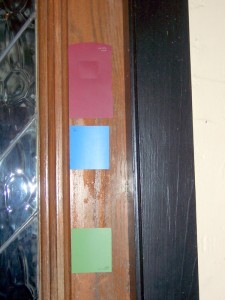 I have been picking up more colors every time I run out with Lisa, (the friend who’s having remodeling work done and is spending a substantial amount of time at home improvement and paint stores).  We had lunch today while the caregiver provider was here with H and stopped at Sherwin Williams on the way home.  I’ll say one thing for the expensive paint people… they have bigger paint chips.  Home Depot’s are smaller and Walmart’s are even smaller. 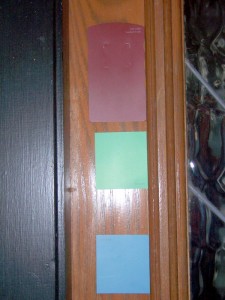 Here are the ones on the other side of the door.

It’s beginning to look a little mosaicish on there.  Hummm,  Maybe I just need to tile the whole thing in different colors… 😉 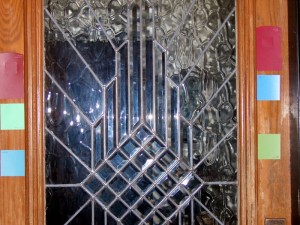