Archive for the ‘ Lisa ’ Category

Another doctor's visit and getting the important things home safely…

You know how you feel when something you’ve been dreading for a long time is over with and it kind of came and went without a bang at all?  How, the relief just isn’t quite enough and so you’re downright giddy?

Went to the Dr. and got me some Rx’s for meds that will make me tolerable able to tolerate all this crap.  And when I say, “crap”, I mostly mean that figuratively.

Lisa went with me and I’m not SURE, but I suspect she was worried I wouldn’t go in and she was just going to leave me there.  That bitch is no nonsense about several things and when she says, “Are you medicated? …Well you need to be!”  You best pay attention.    So, in order to keep from having a nervous breakdown Lisa happy I had to get in and see the woman with the prescription pad.

On our way back home afterward, we pulled into John’s store and Lisa picked up some wine.  Ten bottles, to be exact.  She grabbed some wine totes to get it all out to the car and put her grandson’s, car seat to good use. 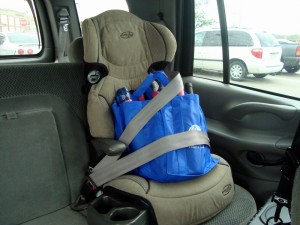 That chick is downright clever if she absolutely has to be.

OH!  This just in!  John heard back from his doc today and his tests all came back negative.  Not thyroid.  Not diabetes.  Cholesterol a “little bit high, but nothing to be worried about”.  So now what?  He lost 65 pounds in the last 4 months and I’m thinking that we may have to start to look in… awkward areas.  He is going to throw a fit and try to get out of it, but he’s just going to have to deal.

Maybe I could hook him up with some of my meds… 😉

Apparently this is boob themed.

This morning I had a conversation with Lisa in which she informed me that she was feeding her fish.  Naked.

Needless to say I had a lot of comebacks to this and then she told me they were all excited because they thought they were going to be breast fed.

I would have just gone back to sleep, but I really don’t think I could have.  And really?  Can’t even imagine the nightmares that were possible.  Scarred. For. Life.

The other day, after realizing that I had been missing one of my favorite bras for a couple of days and was about to REALLY go through the dirty clothes hamper and wash EVERYTHING, I happened to look over at John’s side of the bed and notice that he had attempted to decorate the area. 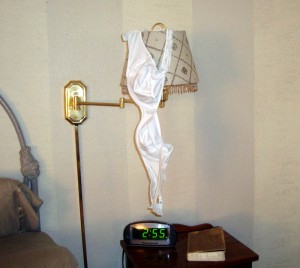 What’s so brassiere bizarre is that I hadn’t noticed it there for at least 24 hours.

From Lisa to Willie

Hello there.  I am just sitting here waiting for the caregiver provider to get here at 11:00 to stay with H for the next three hours and I am OFF!  Lisa and her Mimi are picking me up and we are running the roads.

Let that be my own personal warning to anyone in the area who might be out and about at the same time we are.

There will be Christmas shopping and lunch eating, laughing and cussing, squealing and hair pulling.  Well, OK, maybe not hair pulling, but ya never know with Lisa and me.

I will give full disclosure when I get back.

It is Thursday now and no, it didn’t take this long for me to recuperate from the wild partying shopping spree we were to go on.  The original one on Tuesday didn’t even really happen.  Lisa’s grandson, a three year old, got kind of dumped on her at the last minute, when his mother, never showed up to pick him up from the father’s house and the father and his girlfriend had to go to work.

So we were attempting to shop with a three year old.  We, basically, didn’t.  The whole day was shot.  There was no stroller and it was a constant effort to keep up with where he was.

So yesterday, Wednesday, we struck out again and accomplished a bit more.  I bought two nightgowns for the girls for Christmas and then took them back.  I did keep the house shoes I got them, though.

I bought two pairs of sleep pants and two tee shirts to go with them for The Boyfriend, and they are going back today.  The pants, not the tee shirts.  Kes says the pants are way too small.  They are X-large and I know how big his waist is cause he’s worn some of John’s old belts before.  She says that I keep forgetting how big his thighs are.

He is very large and muscular. and has gigantic muscles thighs.  So his pants have to be bought huge in order for his legs to fit into them.

Maybe he needs to sleep in shorts.  It’s not that cold.  I mean really.  We’ve been sleeping with the air conditioner on for the past two nights.

OK, now it’s Saturday and John and I spent all day yesterday and the day before frantically running around doing Christmas stuff.  And by “stuff” I mean shopping.  You know… buying shit you can’t afford for people you “have to” give to because they always give you something, whether or not either one of you can afford to do it.  And I mean people you don’t even necessarily like, but you are obligated to share Christmas with and give crap to JUST BECAUSE THEY ARE PART OF YOUR HUSBAND’S FAMILY.  AND DID I MENTION THEY REPRODUCE LIKE RABBITS AND THERE ARE A MILLION OF THEM?

(Stepping down from rickety platform I hastily erected for myself.)

Anyway, we were driving in unbearable traffic and trying to make it all the way to a certain store and John popped in a CD since nothing was really good on the radio at present.

All the sudden I am listening to Willie Nelson and Waylon Jennings.

I know.  John is a strange one and his musical taste is… diverse.  You never know which way he’s gonna go.

John was singing along with him kind of low and I turned and looked at him and said, “What did you say?”

He repeated himself and said, quite clearly, “She loves him in spite of his Micky Mouse ways, she don’t understand?”

I could not speak I was laughing so hard.  So there was much backing up of the CD and replaying that particular part, and this version really did sound weird.  I couldn’t understand what Willie was saying right in that particular part, but, I assured him that he absolutely WAS NOT saying anything about Mickey Mouse.   He might have been taking a drag off of one of his herbal cigarettes, but he was not speaking of the mouse.

This is not the same version that John had burned for the CD, however it IS Willie and Waylon and a good listen if you like this kind of music.  I guess I like it well enough, just not my usual cup of tea…

Oh, note the lack of mention of Mickey Mouse…  He says, quite clearly, “…his ways, she don’t understand…”

Moving in a circular motion

Lisa and I were out shopping at Kohl’s yesterday and while browsing through some knit tops she indicated one of them and said,

“Eww, no.  I can’t wear circles.”  To which my curiosity got the better of me and I replied,

Lisa:  *deep sigh-bit of an eye roll*  “They go all the way around and make a circle.  Makes me look and feel fat.  Not to mention dizzy.”

Quite frequently our conversations are reduced to this sort of analogy.  The scary thing is I knew right where she was coming from…