Archive for the ‘ glasses ’ Category

I don’t know if I ever mentioned it on my soggy bloggy or not, but the last time I was visiting Mither and Pop, my glasses got broken. And I mean in a big way. 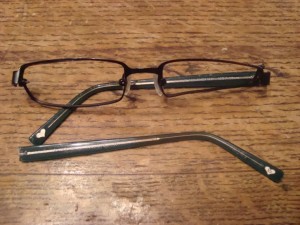 They are missing both lenses.  And have been run over, literally.

Anyway, so all I have is this one pitiful little pair of reading glasses that are, (used to be), the right prescription for me to read with, and that’s it.  No more seeing distance or medium range for me, it’s way over rated anyway.

So John really likes my little pair of glasses.  He says they’re cute and calls them my “tiger eyes”.  I have no idea why.  I told him they are tortoise shell and he insists they are to be called “tiger eyes”.  Keelan, ever observant Keelan, has decided that if her dad is going to call them “tiger eyes” and I am saying they are “tortoise shell”, she needs to have something to call them, too and has chosen… “bunny fluff”.  You may think this odd, but it is true to nature, typical Keelan.

Well, I keep losing them cause I take them off when I need to look at anything more than 24″ from my face and I tend to lay them down.  Anywhere.  So there has been a near constant search going on for my glasses at this house.  Today I thought I left them at Target and was full of despair when we got home.  Kee heard us talking about the loss of the glasses and then John went in the bedroom and came out.  I wasn’t looking at him and all of the sudden Keelan said, “Bunny Fluff!”  He was wearing my glasses just to pick at me and I had left them in the bathroom when I brushed my teeth this morning.

So off to buy me one of these handy dandy contraptions!

Now I am better attached to my tiger eyes or tortoise shell glasses… or bunny fluffs.

Huh.  Bunny fluffs.  That Keelan does have a funny way of naming things.  John is wearing this contraption that is a defibrillator  and will be in it for the next 3 months, until his cardiologist decides if he thinks he can go without or if he needs to have a permanent one implanted in his chest.

The thing is a bit bulky and constricting and John really dislikes wearing it.  So every time he leaves the house Keelan perks up and says, “Dad! Are you wearing your flux capacitor?”

The really funny thing is she has never even seen “Back To the Future”.  Just seen lots of skits and Youtube tributes to it.  And, of course, the aforementioned “flux capacitor” is always mentioned in these clips.

Which brings me to another point.

Damn! Michael J. Fox was adorable in that movie!