Archive for the ‘ Getting back to normal! ’ Category

Another Amberen update… just cause I CAN!

AND I CAN DO IT WITHOUT SWEATING!

I have been taking Amberen for six weeks now and my hot flashes stopped after two.

However, before I started taking it, the paint right here, on the wall in HACK, was starting to blister due to the incendiary hot flashes I was experiencing. Not to mention the state of my bed on any given night. It was awash in sweat, tangled limbs and tossed off clothing.

Hummm, that sounds kinda hawt.  It was SO NOT.

And while having your wife sleep neck-ed may sound like a great idea to any husband, all the tossing and turning, huffing and puffing and yelling, “YOU’RE TOUCHING ME!”, anytime he rolled over my direction really did get a little old a little fast. I think I can safely speak for John when I say this.

I am a mere 47 years old, peoples. I have been having hot-flashes, at least some, since I was 45. You have no idea how severe these things got.

I was not allowed into crowded theaters.

I could slip into a cool tub of water and steam up my bathroom.

I seriously considered moving into an apartment by myself so I could run around neck-ed all the time.  Except for the guys that deliver takeout, I would have NO visitors. No way was I going to cook. Yeah. Those guys would just have to suck it up and get over it.

I had nightmares about spontaneously combusting only to awaken and find that there was a very real danger of it. If only I weren’t so damp.

The dogs were not allowed to sit on my lap. I was… sticky.

Life sucked and then, after one particularly whiny post about my hot flashes this strange guy, named Adam Hodson (By “strange” I mean unknown, and in no way intend to insinuate that Mr. Hodson is anything more or less than a superhero an upstanding American citizen.), wrote me an email and told me about Amberen. So I went to the website, investigated, googled it and and asked the dogs what they thought. It was unanimous. I got my three months worth and started taking them.

I swear, within two weeks I had stopped having hot flashes. Now my energy level is up there where it was years ago and John would boast that when he rolls over in bed and accidentally brushes against me I don’t shriek in his ear.

Yes. Life is like a dream here at the HalfAsstic House. 🙂

15 Comments
Filed under: Amberen, Getting back to normal!, John, WOO-HOO

It’s been a year of almost pure shit.  I am sick and tired of it and want it over with. It can not come soon enough. And, I know it’s not supposed to make a difference what year it says it is on the calendar. There is absolutely no reason to think that having the year change from aught nine to ten will make any difference in our day to day continuance. I mean why should it. Logically, it won’t make any difference at all.

I know that it was very close to the beginning of this year when things started spiraling downhill. John’s job got a ton more stressful. We had Marital Problems. His health issues. Issues that weren’t even acknowledged to us by his then general practitioner, and we ended up finding out with his stint in the hospital for the better part of October. Yes, October in particular, can bite my ass.

Henrietta has decided that Kessa’s boyfriend is the devil. No. Really. She selected him from all the other contenders of people that she see’s day to day sometime in October when John was in the hospital.

It all began with her telling my SIL, who was here taking care of her while I was there with John, that The Boyfriend was a shifty character who was just trying to sleep with Kessa.

Upon John’s and my return she announced to us that my SIL was unable to sleep while she was here one night because The Boyfriend was going in and out the front door all night and he was trying to sleep with Kessa.

Of course the SIL had already alerted us to this latest rant and we were kind of expecting, well, something like this.

I came *this* close to telling her something like, “Henrietta, I know it’s been a long time since you “slept” with anyone, but it’s not accomplished by going in and out the front door of the house.”

I just explained to her that SIL said no such thing and we had talked to her already and she must have misunderstood her.

Soon afterward, she indicated her annoyance with The Boyfriend in more ways to me.  Saying little muttered things under her breath about him being lazy, shiftless and no good. Rolling her eyes at the mention of his name. Said things like, “Oh, you know how that boy is…”

Exasperated sigh, “Krissa, you know how he is!”

“NO! Truly! I do not! What have you got against him?! You’ve been badmouthing him for days and he has done absolutely nothing to deserve it! I stopped just short of telling her that he is just the latest in a long line of victims she has plucked out of thin air to harp on, (including me), and she is just never happy content if she’s not being hateful about someone.

At this point she stopped and told me that while John was in the hospital The Boyfriend threw the telephone at Kessa.

Oh, yes. She was certain of it.  He was standing at the top of the stairs and Kes was standing on the landing and she told him she didn’t want to talk on the phone and she’d call the person back and he THREW the phone at her!

I assured her that this did not transpire and took the story in and was telling John what she said when Kes came home and caught the tail end of it and was amazed that there actually was a tiny grain of truth to another one of her wild tales.

Old Blue was for sale during all this time and we had an ad on Craig’s List. 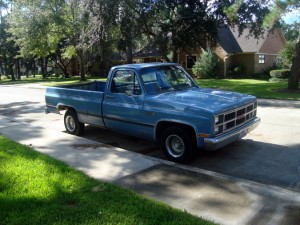 We were getting calls for it and Kes and Keelan were taking numbers for me to return from the hospital or where ever. Hence, she took the phone upstairs with her to watch a movie. She came back down to make popcorn and The Boyfriend appeared at the top of the stairs and hollered at her that there was a call for the pickup. She said tell them my parents will call back and he said they just wanted to ask some basic questions. So she stepped up onto the landing and he pitched the phone down like we have done a thousand times, except Kes is the worst catcher in the history of people with hands and practically never does anything but break the fall for the phone. (Stairs are carpeted, whew!)

So, as per normal procedure, she drops the phone and then picked it up and talked on it and hung up and that was the end of it.  OR WAS IT?

God, please, PLEASE give Henrietta a more loving, tolerant, accepting soul and fill her with the understanding that there is no one in this house that is pure evil and actually the only evil she has to worry about is what she brings out in me when she gets all bitchy like this… Actually, scratch all that.

God, PLEASE give me a more loving, tolerant, accepting soul…

18 Comments
Filed under: Apocalypse, Chapped Arse, Getting back to normal!, Henrietta, Strange and socially akward

We are home from the hospital and I am just kind of wallowing around in guilt.  We have been here since the 15th.

That’s right.  Almost a week as I type this.  I am a horrible person for not updating everyone sooner.  But, I am also a tired, and never gonna get caught up with anything person.  You know…. that kind.

John is just tired.  All the time.  I have tried to get him to mow the yard help him sleep in anyway I can, but his sleep is restless at best.  The cardio guy has him on blood pressure meds that keep it really, really low so this is a lot of the problem.  I think the rest of it is that not eating salt and carbs has sapped his will to live.  I know it would mine.

SEE?  I fully intended to finish that and throw it out to the blogosphere last night!  I suck!

We did go to the cardiologist yesterday and got his Lasix increased by half again and his blood pressure meds decreased by half.  So, all in all, he feels much better today.

Does anyone out there have any idea how hard it is to cook diabetic recipes with NO SALT.  Both?  At the same time?  I mean it’s doable… just yucky tasting.  I made stew tonight.  With low sodium tomato sauce, V-8 Juice and stewed tomatoes.  And, of course, stew meat, potatoes, carrots, cabbage, onion and garlic.  It tastes good, just needs to cook on  low for a while longer to get the meat tender.   I sprinkled some of that “Nu Salt” on it and went very lightly with it since it tastes like gym socks… Not that I would know, but… well.

OK, whatev!   John is feeling rather hardier today and this is VERY gratifying.  He is going to get his flu shot tomorrow.  I know what you’re thinking. (Yes I do!)  You’re wondering why on earth a heart patient would ever leave the hospital without his flu shot this time of year. (YES, YOU ARE! SHEESH!)  Because he’s the biggest tightwad heart patient ever!  When they offered him a flu shot, (multiple times), in the hospital, he pictured the free one he could get from his employers.  He works for a major supermarket chain and they have pharmacies in each one.  Employees are all given a free flu shot.  So he declined the ones offered in the hospital.  And got some eye rolls from me, that probably went totally un-noticed.

There are 6, (SIX), flu shots left at one of the near by stores and they are saving one for him.

There are no N1H1 shots in Texas.  What about you guys?  I am really curious about this so please let me know if your state/country has them and if you have gotten or are going to.

Henrietta has no idea about what all has gone on.  Well, of course she knows he was in the hospital, but I told her he had a bad case of pneumonia.  She has cried for every new person that has come to the house.  I think the last ones were my parents.  They went home a few days ago.

With each person she goes into a sniffling thing and says repeatedly. “He’s my oooooonly sooooooon!” My mom told John that she feels sure if he had a passel of brothers his mom probably wouldn’t care so much.  Of course she was teasing him!

Please come visit me… she needs “new meat” to cry on…

So there!  I am NOT going to go on and on and on!  And tomorrow morning I am going to start reading posts, SO HELP ME GAWD!

I love you guys so much and appreciate the lovin and well wishes more than I can say!  I can assure you of one thing!  I never felt alone!

13 Comments
Filed under: Getting back to normal!, John is sick.
Spam Blocked
59,660 spam blocked by Akismet
Recent Posts
Link to Me…