Archive for the ‘ Auntie-Poo ’ Category

The two girls and boyfriend left at 7:00 AM and made it here at 2:00 PM.  They report not running into any traffic at all and only taking one wrong turn, (of which I am very proud of them because they navigated a different way to get to the freeway with the map instead of turning around and looking for the missed road).  Plus, they are all terribly excited to have discovered that “up yonder”, (I have raised nothing if not a bunch of little hicks), they have convenience stores with Monster Slurpeeies.  I don’t mean  just large Slurpeeies, I mean nasty Slurpeeies made with Monster Energy drinks.  Black ones.  Eww.  But nothing delights my brand of little weirdo’s like a high energy, insane sugar, black, vomit-tasting, Icee.

They report having tons of fun and were really not happy to have to come home so soon.  They all go back to work tomorrow.

The boyfriend and Kes went out to Pop’s gun range on the back 40 and shot, well, I am guessing a number of different guns, rifles, slingshots, bow and arrows, anti-aircraft artillery…you get the idea.  Pop reports that he wants to be careful and never get them mad at him because they are both really good shots.  Keelan didn’t want to go do that, we don’t know why.  I guess she was busy getting into mischief somewhere else.

They lit up the sky with fireworks, (no burn ban outside the city limits this year, Woo-Hoo!), and went to my auntie-poo’s house in Burleson where they have been busy installing a GIGANTIC pool.  I keep getting these partial pictures of it and I am having a hard time picturing the entire thing so I asked if somebody couldn’t take a shot from the upstairs balcony.  No, I had already been sent these shots and they are going to have to get some aerial shots to get the whole shebang in a photograph.  It is impossible for me to imagine it, I guess.  I can remember the area it has  been built in quite well.  It has a beach entrance on one end and a built in hot tub, waterfall along with grotto behind it, a vanishing edge and a milliondy-gillion gallons of water.  That link of the vanishing edge is NOT their pool.  I just wanted a good example of one.  I want some good pictures!  My uncle is a pool builder by trade and his son, (my cousin), is in the business with him.  They do all kinds of pools and have many, many years of experience.  The name of their company is Sun-Ray Pools.  There.  A plug I wasn’t really even planning on doing!  But this should help explain how they came about getting a pool with every single bell and whistle known to man.  Anyway, they know what they’re doing.

While I’m plugging my family, my auntie-poo raises and breeds Maine Coon Cats.  They are the largest breed of domestic cat there is and really very beautiful.  Her establishment is called Amerrykoon Maine Coon Cattery.  Interested in a huge cat?  She, literally, ships all over the world.

John and I went to the movie yesterday!  How many years has it been since I went to a movie?  I have no idea.  We saw the new Indiana Jones one and while it was a bit hokey, my gawd, of course it was, it was Indiana Jones!  It was good.  A ton of action and one long, continuous chase scene.  Bad guys and good guys clearly defined by their Nazi uniforms and Russian accent/fedora and American accent.  Harrison Ford is still HAWT!  I guess he will be till he dies.  Anyway, I have to say that the movie experience would not have happened if my SIL hadn’t offered to stay here while we went.  So I am grateful for that.  However, I lost enthusiasm for my appreciation when SIL left the room and H told me to give her $20.00 of her money.  I said, “Why?” and she said, “Well….because she came and took care of me….”  I said, “Henrietta, she is your daughter.  You’re not supposed to have to pay her to come and take care of you.”  I came very close to yelling, I DON’T GET PAID, I’M NOT YOUR DAUGHTER, AND I TAKE CARE OF YOU 24 HOURS A DAY, 7 DAYS A WEEK, WITH THE EXCEPTION OF THE TWO HOURS SIL COMES AND STAYS WITH YOU LAST THING ON SUNDAY NIGHTS, usually.  This week she really came through.  Anyway, she just can’t stand it.  She gets so few visitors that if anyone, even her daughter shows up she impulsively pushes cash and gifts on them before they go.  So I wrote her a check.

Oh, I forgot!  The best part!  The sound was screwed up during all of the previews and once or twice during the movie and someone had to keep going and getting someone to go to the projection room and fix it somehow.  So when the whole thing was over there was a guy handing everyone a free coupon for another movie.  So I have another date, people!  Wonder who I’ll take….tee hee hee

I finally put up the new tie rack that my pop made and Mither and Auntie-Poo brought with them when they came to visit last week. No more ties on the floor! I can’t wait until John gets home and sees! Now he owes me-big time! 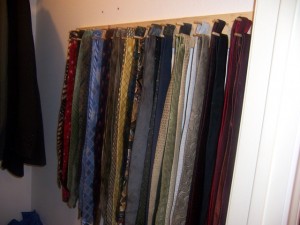 Company's gone and In Memoriam

Well, Mither and Auntie-Poo departed for the long haul home, today. They will be driving north to the Ft. Worth area. We had a lovely time and H was really fairly well behaved. She hasn’t said anything resembling accusations that we were all table-dancing, man-chasing, liquor-swilling, ho’s. I am proud of her.

The house is a wreck. There is no other way to describe it. The combination of me being sick for days before the company came so it wasn’t EVEN in shape when they got here, and then spending the rest of the time frolicking and whatnot, has left it in shambles. (You know how it is once you get started dancing on tables it’s hard to stop). Now we have marauding dust bunnies, piles of dirty clothes that could take your breath away, and a state of general chaos that makes Bosnia look like a sanctuary. Now, don’t think that my dear Mither and Auntie-Poo are the direct cause of this catastrophe. No. They are more the indirect cause. Because since they have been here I have done absolutely nothing in the way of domesticity. I now pay.

In more depressing news, our beloved coffee pot, (I have named her Cecila), is trying hard to get across the point that she needs to be… put down. I know it sounds harsh but, really, she isn’t producing coffee anymore and therefore it is hard to justify her existence at this point. When filled to the top with water for a fresh, aromatic pot of delicious, life sustaining coffee, she “makes about 4 cups and quits. There is always about 6 cups of water left in the reservoir that won’t “make” until it’s been restarted two or three times.

Please pray for Cecilia. I will surely cry when she goes. 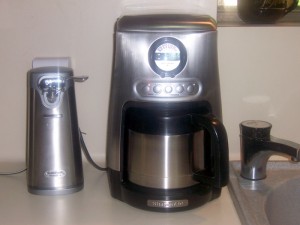 Sorry I have abandoned my…post. BAHAHAHA I have been extremely busy being hostess, getting ready for the big graduation and being sick.

Mither and Auntie-Poo arrived on Wednesday amid much hoopla and fanfare. (Picture parade with confetti.) We were all really, really glad to see them. They haven’t been down here to visit me in a long time. Mither usually comes with Pop to see me a few times a year, but it is a real treat when Auntie-Poo gets to come with her. The three of us together are, well, somewhere between The Three Musketeers and the Three Stooges. We always have a riotous time. We have shopped and sat around a bit and I got my heart blessed a good deal for being so disgusting and sick. The Plague will do that to ya.

Kessa has made this family so proud of her. She has worked so hard her entire academic career, to earn the honors she was presented with last night. She was also a bit excited. A very good bit. I will post a picture of her soon, as all the ones I took were on Auntie-Poo’s nifty new Nikon camera and we gotta figure out how to get ’em outa there. She looked so pretty, though. She wore the blue robe with a white National Honor Society stole, and had a blue and white cord for graduating Cum Laude and a gold one for National English Honor Society. After the shin-dig, (OK, we ran for our lives after they called her name the second time to receive her fake diploma that she has to wait until…Monday(?) to receive her real one to put in the folder thing.), we had to get out of there to get the grill fired up for shishkabobs. We had a wonderful time and got really full. PLUS I ran no fever all day long. I do believe the worst of the virus that ate my soul and then puked it back out is over with.

Yesterday we went to World Market and bought, (between the three of us), three tins of their wonderful ginger snaps. I am not a huge fan of gingersnaps, normally. Just pretty much take ’em or leave ’em kinda gal. But these are the most wonderful things ever and you get a good sized tin of them for about $7.00. WORTH EVERY PENNY.

We also went shopping and I got new clothes from Mither and Auntie-Poo for my birthday. This shopping together for the birthday is a fairly traditional thing with us. It gets me outta the house and is fun and I get stuff that I know for sure I like and fits and will wear. And of course Mither and Auntie-Poo didn’t leave empty handed, either.

We are going to go to breakfast here in a few minutes. You’re invited if you want to come and I’ll pay. I feel sooooo secure in saying that as I am pretty sure readership has dropped off to next to nothing. Again, sorry for the long delay! REALLY!