Hi, gang! How’s it hangin’? We’re all good here in HalfAssticland. I am preparing for a visit to Mither and Pop’s house here in the next couple of days. Mither told me the last time I was there that I was expected back soon to complete the ginormous kitchen redo we began when last I visited her.

I am going back on Friday and taking EXTRA slave labor with me. Connie, has foolishly sweetly made her services available and I may be a tiny bit slow in some areas, (mathematically), but I know when to take advantage of a unwitting victim.

She offered to help. I screamed yes and got someone to notarize a statement of agreement right there on the spot.

(Having a notary on retainer is one extremely useful tip when attempting to take advantage of good friends.)

So there’s no backing out now and we are off to die in the evil clutches of a maniacal kitchen makeover mad woman.

I have before pictures of Mither’s kitchen to share, but am going to wait until we are through and I can do side by side comparisons. In the mean time, I have other pictures of questionable quality to regale you with. 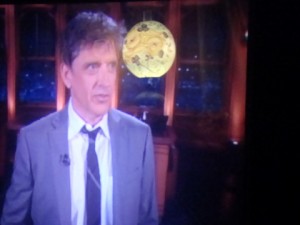 Craig Ferguson attempting to break my lamp with his telekinetic powers .

Ok, I was bored and it was late as evidenced by the shot of my TV with the Late, late night talk show on it. My point? Yes, I’m getting there! You people are pushy today…

That lamp in the picture, (the giant floating sphere beside Craig’s head), is not on his desk. It’s in my living room. Confused yet?

It’s a reflection and anytime I am sitting in my favorite chair and one of the kids is reading or doing homework on the couch with the lamp on, that’s what it looks like to me.  It’s annoying and I keep considering writing in to his show to complain… I just can’t think how I’d state my complaint… 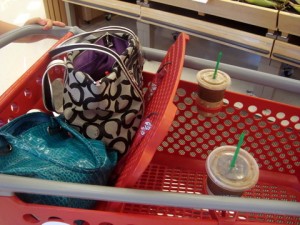 Target and Starbucks makes for a perfect day.

Next up here we have proof positive that Starbucks really DOES love me. Nothing rolls better than a Target shopping cart and the only thing that can top that is one with the nifty little cup holders you can borrow from the in-store Starbucks to clip on the sides and hold your coffee away from your purses. Kessa and I are all over this whole phenomenon. 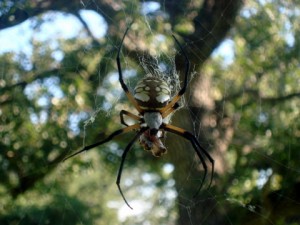 He’s busy munching on a grasshopper one of the grandkids tossed into his web. He was really cool to watch and I wonder if he’s still there. I’ll let you know on Friday when we go. 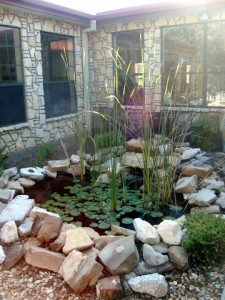 Rather self-explanatory, don’t you think? 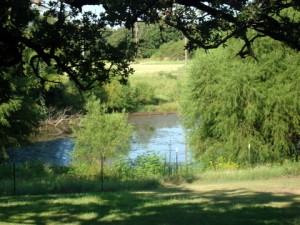 The tank at Mith and Pop’s is BADLY in need of a good rainfall. It’s getting all scummy. 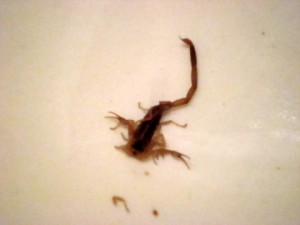 Scorpion I found in the bathroom lavatory and smushed with a jar of petroleum jelly I was removing my eye makeup with. 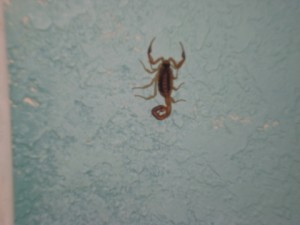 On the wall in my room

This guy was on the wall inside the door of my room, about two feet down from the light switch. This was caught right before I murdered it with my flip flop.

Oops. Did I say “caught”? No, darling. Not in your wildest dreams. Taken, I meant TAKEN. As in the photo was taken. 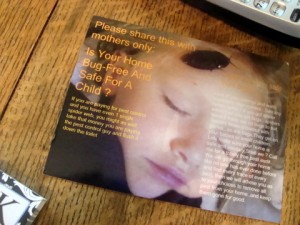 I received this in the mail the other day and was a tad… disturbed. I mean, obviously the gigantic roach has been photoshopped onto the child’s forehead. Still… How very disgusting and horrid that anyone, yes, even in this economy, would swing so low with the scare tactics.

I had to snicker though… “Please share this with mothers only”. No father anywhere could possibly react properly, I guess.

Just to see what happened I left it on the wet bar, a.k.a. catch all area where everyone dumps their purses and leaves and picks up notes to others, etc. These people won’t throw away my mail so I knew it would stay. For days and days I kept turning it photo side up and the next time I saw it, it was turned over, face down. Finally Keelan snatched it up and demanded, “What the heck is up with this!? It’s gross, it creeps me out, and I want to throw it away!”

I started laughing and so she just did. 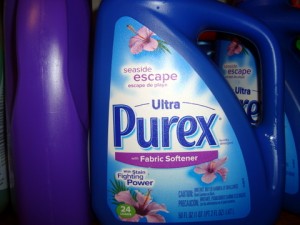 This is a test. Look closely at the photo above. NO! Never mind! That’s exactly what I don’t want you to do! How ’bout just glance at it and try to imagine doing it WITHOUT MY YOUR GLASSES.

Now, I will put on my glasses and show you what it REALLY says. 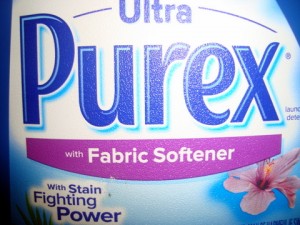 Do you see the teeny tiny little “with”, before the words Fabric Softener? Do you also see that NO WHERE on the front of the bottle does it say DETERGENT?  OK, that’s not true. It actually does say it in equally teeny tiny words over on the right, but my gawd! It shouldn’t be that hard to figure out what the heck you’re using when you start pouring laundry ingredients and mixed drinks!

I thought I’d never get all the soap out of the fabric softener dispenser.

I really need to just get some contact lens.

OH! Don’t forget to drop in on this post and enter my contest where you could win fabulous cash and prizes!

Whatever. It’s some good shit.

Till next time! Don’t let a perfectly good HalfAssticalism go by with out documenting it!