Hi. I know I’ve been a deadbeat blogger lately. I have been overwhelmed by all kinds of things that you can’t even begin to understand.

You mean, why wouldn’t you understand?

Because I haven’t told you all about it yet, that’s why.

So I know I mentioned that Henrietta is on hospice and not doing so well. Well, she’s getting worse at a fairly steady rate here lately. She no longer gets out of bed and all the dictates coming from her, (because that’s what comes from her), are being issued from her bedroom. There’s was quite a lot of bell ringing and to-ing and fro-ing going on for a while, but now she is sleeping most of the time and even by doing this she is stealing my good excuse for my not blogging.

She can just be SO unreasonable.

I have been to see the witch doctor and she threw pills at me almost as soon as I started talking to her. So screaming, crying, rending of garments and pulling hair out is off-putting to some, apparently. Who knew. Actually we came to the same conclusion about everything I talked to her about and I just love it when I can go to the doc feeling like I know exactly what I need and then come home with just that.

OR, not having any idea what I need and feeling fairly sure that what I got will do the trick.

So, as per normal procedure, things have been busy around here. We have a new member of the family house-guest. 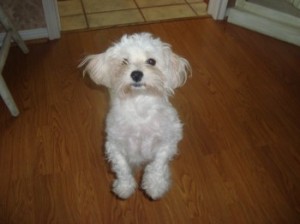 And no. That’s not Baby. Here is Baby: 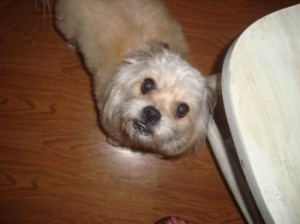 Smiling and ready for the camera. Notice how Baby needs a clip, yet not nearly as badly as Sasha. Sasha does NOT like to have her face touched and bites.

Or at least she used to. Other than that she is the sweetest puppy you can imagine.

Here’s the deal. We rescued her from a friend of a friend’s backyard where she was being kept in a tiny pen in the corner and never let out. She was covered from head to toe, LITERALLY, with mats so dense and tight to her skin that I thought we’d never get them off. It was like surgery to remove them. And she was really very good and still and seemed to know that we were trying to help her. She is a mutt hybrid model that is mostly poodle and has a docked tail.

When I say, “we”, I am talking about Lisa and I. Kessa alerted us to Sasha’s existence and stole transported her home. Then, while she was at work, Lisa and I began to de-mat her. At some point we had exposed enough skin that we began to think that maybe a bath was in order so she would feel even better and not smell so darn bad. She was tolerating it very well when Lisa tried to clip the nasty mess that was on her face and sticking up in front of her eyes. It was all black and stiff from tear-duct seepage and was where most of the smell was coming from.

Broke the skin and everything. Her teeth landed on her finger, on top of and under her fingernail. Hurt like a sumbitch.

We decided to leave her face alone for the time being.

So here she is living in my house for the past three weeks and getting all kinds of attention and loving while I am attempting to crate train her. She is a firm believer in peeing outside and getting accolades and treats for it, then coming in the doggy door and pooping in the house.

We still have a ways to go.

She still won’t let me clip her face, either. However she will NOT bite anymore and I can touch it all I want. Just not with scissors or clippers.

She is sweet, energetic, wormed, about a year old and now answers to her name.