As an attempt to get a jump on things, I have been discussing with Tanya, the wonderaide that comes and gives Henrietta a bed-bath and feeds her breakfast 5 days a week, whether or not H has been telling windy stories. Mainly because I have found that when I am able to circumvent the telling of a particular line of storytelling it ceases to grow in her leetle head. Less problems later on, crying hysteria, embarrassment, etc.

The stories always make their debut with Tanya. You see MY little 87 year old, invalid mother-in-law is not all about just asking rude, embarrassing questions. Oh, no.

She gives as good as she gets.

Today Tanya reported to me that H is once again going on about Gilbert, my older daughter’s boyfriend and his, now well known, illegal shenanigans. The ones that live solely in her aforementioned leetle head.

According to Tanya, last night as H was lying in her bed about to go to sleep, a “very big policeman knocked on the front door quite hard and arrested Gilbert for practicing voo-doo.

A. If she was in bed how on earth could she see whoever came to the door?

B. Nobody came to the door. But I do remember one of the many times she rang the bell for me to go in there and do some sort of bullshit something, she asked me who was at the door. I replied, “No one. Why?” She said she had heard someone knock. I assured her she hadn’t and no one had knocked. “NO, REALLY, NO ONE!”

C. I don’t know for sure, but I don’t think it’s illegal to practice voo-doo.  Don’t know, don’t want to ever find out for sure.

D. Voo-doo? Really? This from the staunchest Catholic I know? I guess the superstitious Messican wins out over that.

Anyway, as I said, I try to preempt these things before they get crazy. Yeah. Too late. But you know what I mean if you’ve been following for long. The stories she invents grow in her head until they are fairly unrecognizable from the originals.

And this is Texas. She believes bigger is better.

So when Tanya had been gone for a while I wandered into the living room and asked her what she was finding in the paper. We chatted for a few minutes about the obits, cause hey, what’s a conversation with an old person without a discussion of who all they know that’s dead.

Presently, I said, “Henrietta, Tanya told me you were telling her about a policeman  being here the other night.” She looked a bit startled and reminded me of a child caught with her hand in the cookie jar.

“No, Henrietta, there has been no policeman here.”

“Oh, but he knocked on the door really hard! I heard him, Krissa!”

I explained once again that she didn’t hear any such thing and it was all in her head, just like I told her the night she insisted someone knocked.

I asked her why she thought it was a policeman and she said because Gilly was here.

Anyway, the conversation wound down with me telling her to stop making up stories and lying to Tanya. Not that she would ever believe them, but someday someone else might be here and she would totally tell them all sorts of shit that they would have no idea if it was all fabricated or not.

Kessa was upstairs listening to all of this, no doubt grinning the entire time. She came downstairs later and when I went over and looked at the grocery list this is what I saw:

I have a serious malfunction with my keyboard. 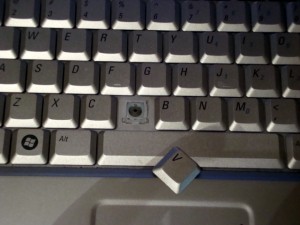 Well, not exactly missing so much as off and I can’t get it back on.

I was pounding away several weeks ago and the “v” was kind of strange and took a couple of extra hits to get to work. So I, as many times before, just plucked the little thing up and cleaned out the space underneath it. Something was stuck under there.

Then, just as always before, I tried to reapply the key. It won’t go on. I don’t know what the problem is. I have pulled up other keys and put them back on since then.

But not the damn “V” key. Nooooo. Now I have to carefully pound on the button. There is no light tapping involved in “v” typing.

I must really loVe you people! Do you have any idea how many times a “V” is typed in a typical post? I am being forced to stop and pound on that one key every time!