Halfass floundering in the snow

Hello duckies!  I have been totally out of pocket for a few days and am happy to report that I am back in action!

Lisa and I took a Thelma and Louise road trip up to my folks house in Decatur, Texas. Mither was having some blood pressure problems and even went so far as to get admitted to the hospital via the emergency room a couple of days before we went up. She is aaaaall about the drama when she wants a visit.  We told her it was unnecessary and just a simple invite would suffice. That ain’t how she rolls. *sigh*

So we got going up there as soon as we got a call from Mither saying, the weather was supposed to be dreadful and a ton of snow was due to fall. A TON.

OK, all my friends up north, I know what you’re thinking, how much could it possibly snow down here in The South?  I am telling you, it was A TON.

It started snowing on us as we were driving up there around three hours from destination. Huge flakes coming down hard.  This continued the entire way there and by the time we got there, (six and a half hour drive made into a ten hour drive), the snow was about 14″ deep. (Or up to Lisa’s waist knees.)

We did great. Went the whole way with no problems. When we got to the place that we usually turn off of the interstate and take a scenic, less traffic-y, route, we pulled over and discussed the best way. It was a unanimous decision to stay on interstate 45 until we got dumped off on highway 287, instead of going remote roads. Sooooo glad we did. Besides, Lisa’s GPS just doesn’t understand back roads as a way to get anywhere. That bitch told us we were going the wrong way no matter what we told her. She eventually got attitude, too.  Threatening to “pull over” worked with my kids. Not her.

Mither and Pop live on a private road along with a handful of other people and there is a BIG space between houses. Acres, in fact. Once we turned off the county road onto the private road we were a tad scared. There appeared to be one set of tracks plowing through the drifts and the road was completely indistinguishable except for these tracks. So we followed them.

I should point out here that Lisa has a nifty new Honda CRV with all kinds of cool gadgetry. We were still figuring some of them out. As soon as we got into the snow a warning signal appeared on her dashboard. This worried us and as she drove slowly, but steadily down the looooong drive/private road. So I am leaning over looking at the dashboard while she is approaching the intersection where the sign post says “Wilde”, and points off to the left of the sign and “Murphree” and points to the right. She wasn’t real sure she remembered which way to go and started asking me, “Right or left?! Right or left!?”.  I was looking at the dash and just said, “Straight.”. She turned right and was trying to follow the tracks when my head popped up and said, “STRAIGHT! STRAIGHT! STRAAAAAAAAIGHT!.

The warning sign on the dash turned out to be a thing that pops up when you are hydroplaning and are too stupid to realize it. Well our wheels were spinning all over the place.

Did I mention we were white knuckling it at this point? Tension was running high.  She swore there was no “straight” and somehow this warranted a hard right. Whatever. We were in the tracks of something. One pitiful little narrow set of them.  I am pretty sure her car didn’t have the ground clearance to clear the snow piled up in the middle so we were giving that a flat top cut.  I told her not to stop, no matter what, but not to go to fast either. We followed the tracks fairly successfully to the first house on the right where I, for some strange reason, pictured us driving up and turning around in a magically cleared off driveway.

Anyway, at the turn into the driveway we slid sideways off the tracks and we continued to go for as far as we could while navigating for all we’re worth back towards the elusive tracks.

There may have been some screaming, cussing and hair pulling, (each others). We will never say for sure.

So when we ceased to move there was a quick reversal and we plowed backwards for all we were worth. The problem was we didn’t turn and ended up in what turned out to be a ditch. I feel like I need to point out right now that there was no ditch when the snow was all over it.

But, sadly, then there was.

We sat there for a good minute and a half, mostly just looking at each other with saucer sized eyes. Then of course, as things go without fail in rural Texas, a pickup pulled up behind us and Bryan, one of my parents neighbors got out and came up to the window and said, “So…. whatchadoin’ Krissa?”

I, (quite valiantly), fought back a deep blush and said, “Oooooh, nuttin.” At this point, I believe Bryan and Lisa were introduced and he said he would haul us out.

I think I mentioned this is rural Texas, so there was no shock or amazement when he reached right inside the back of his pickup and with one hand pulled out a log chain while the other hand dove into a mound of snow that had collected back there and retrieved a fresh beer.

Soon we were hooked up and in neutral. He was hauling and spinning and fishtailing back and forth, yet the four wheel drive he was in couldn’t yank us out of the culvert we had dropped off of.

You should have seen Lisa’s and my eyes about then.

This all took maybe four minutes. Then another set of lights drove up behind us and Jeff Murphree and his son, Bradly, climbed out and trudged through the snow looking for all the world like they had nothing better to do. They were still in their firemen gear from work.

Oh, did I mention that Bryan Massey is an EMT? Yup, he was off work that day and well into a case, 12 pack, six pack of beer.

However, I knew we could not be in better hands.

About that time, Dalane Bible, not just a neighbor, but a friend of mine from high school, showed up.  Lisa and I looked at each other and she said, “Shit… they’re all gonna start peeing on the tires about now…  She had already abandoned the drivers seat, saying something to the effect of, “I’m not driving. You guys know what you’re doing. No, really, I’m not driving!” So Dalane hopped in the front and threw it into drive as Bryan commenced to yank our chain. Heh.

Did I mention the amount of testosterone in the air was palpable?You could have cut it with a knife.

So Dalane  drove while Bryan pulled and we made it neatly into our driveway.  Eventually.  It was a MESS. Snow stacked up everywhere.  Later, before we left to go home we whipped up a batch of banana nut bread muffins and my family’s world famous Oatmeal Butterscotch Cookies, and delivered them to all the houses in the tiny community where our heroes live.

We had a wonderful time visiting Mither and Pop from Thursday through Monday. Mither was released from the hospital on Saturday and we collected her without too much trouble in Pop’s pickup.  When we got home we did our best to take care of everything around there while we were available. Pop said he wanted to hire us to just stay and, “be full time”. Unfortunately Lisa had a doctor’s appointment the next day that she was determined to keep and I had to get home to take over the upkeep of Henrietta.

I will tell you what happened with her while I was gone on our next close encounter. Promise!

Here are some pics of how beautiful it was while we were there. 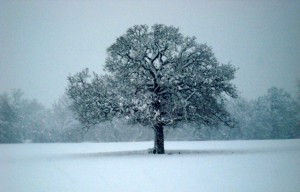 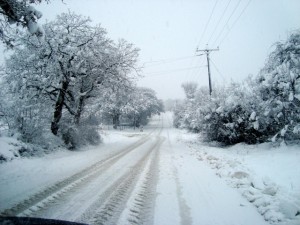 Above is the county road that led to my parents road/driveway. 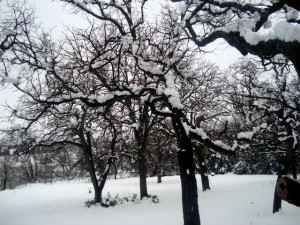 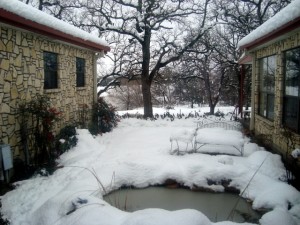 The koi pond from the window. Wonder what makes them want to even live in this kind of weather? I would just DIE if I was wet AND cold. Not to mention have a frozen ceiling. 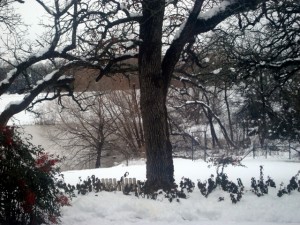 The tank, where half of it was frozen. There were ducks down there on the half that wasn’t, but I never did get a picture of them. 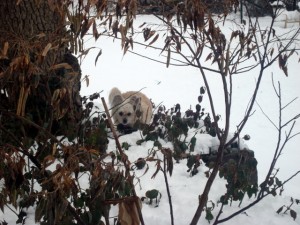 Baby doing a poop. Once she figured out there was n0 other way to do one than put her butt down in it, she was willing to go. Though I really don’t think she was happy about it. I guess I can understand her feelings…

Until next time! Free toes, everybody!

Yes, I really left you with a picture of Baby pooping. This is the kind of documentation you have grown to expect at HalfAsstic.