B-DAY, HACK, SHAM, and other abbreviations…

Hello, people!  It is a GORGEOUS day here in HalfAsstic land!  The sun is shining bright and the breeze is light with a perfect robin’s egg blue sky.  The flags have been put out on our street for Veteran’s Day, tomorrow and it is also Kessa’s birthday!  The girl is now 20 years old… or as The Boyfriend says, “in her terrible two’s”. Heh!

She made quite a haul with all the loot she got.  She liked everything I got for her except one sleep-shirt that has a V-neck instead of a higher collar.  It is NOT cut low!  I mean she’s my daughter for heaven’s sake! Why on earth would I be buying her low cut, smutty things?

Whatever!  This does not stop her from announcing to everybody that I got her skanky lingerie.  Heh.  Lil brat.  She gots the huge bewbs, (they both do), and is very careful to wear higher necked things.  Still… she needs to try it on.  I don’t think it’s low cut at all.

Yesterday I wandered into HACK and John had gotten up early and made his little self busy.  Oh, yeah… he had quite a time.  Let’s take a look at some of the necessities of corporate digs at The World According to Garp John.

First of all I was greeted with signage.  One on the doorway in the foyer and another one, behind it back there, on the doorway from the kitchen.  BWAHAHAHAHA!  That boy does love to play with Print Artist! 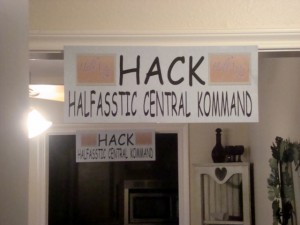 Next, I wandered over to the table and found my name plate.  And I know what you’re thinking, (Yes, again!…Sheesh!). “Krissa, why do you have two printers that obviously aren’t even hooked up on the desk at HACK? This seems rather unprofessional, and we all know you to be the epitome of professionalism.  Someone who would never, for instance, clutter up their work area with useless electronics or any kind of yard care equipment, OR talk about huge bewbs on your blog.”

Yeah. Well you were ALMOST right. 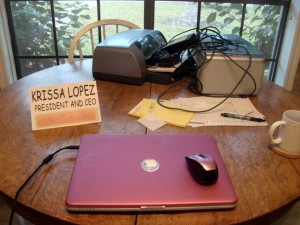 We’ve got to get those printers on Craigslist, pronto.  They both work fine, but need ink, so who would buy them if we can’t prove they work?  Ink is freakin’ expensive, hense the reason for the nifty newish Canon printer.  We got it on sale and had a 20% off coupon to boot and the other two both needed a million (or two) dollar’s worth of ink to make them work.  The Cannon ink is much less expensive AND we can replace individual colors as they run out instead of buying a whole new color cartridge.

Next we see my brand new laptop!  “What’s that?”, you say… “A new Apple laptop? Why, Krissa you must be doing extremely well at HACK to have proven worthiness enough to get yourself a pretty pink laptop that looks so much like the old Dell, yet has the Apple on it to PROVE BEYOND ANY DOUBT that it’s an Apple!…Waaaaaait a minute! Krissa!  Did you…..?” 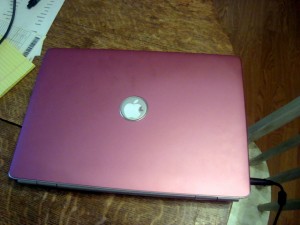 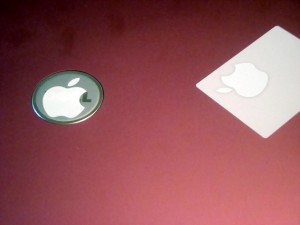 Yup.  It’s just a sticker I got from Kessa that was supposed to go on a teeny tiny ipod shuffle that she and The Boyfriend got for his niece.

But what else would you expect from the Head SHAM working at HACK?   😉

Clearly, I cannot be trusted.

*Amended to add that John pointed out that the printer is not “cordless” it’s wireless!  Whatever.