It ain't no Man Cold.

Hi, gang!  I haven’t been around much in the past few days and we’ve been kind of in an incredibly busy holding pattern here at HH, (HalfAsstic Headquarters).

John is sick.  And before anyone out there has the usual, accepted and, yes, expected response of, “Well, yeah…. but he’s a MAN and therefore no matter how bad he thinks it is, it’s about a tenth that bad in reality.”, I need to point out that we passed the point of not taking this thing serious several days ago.

Looooooong ass story cut down to a dime novel size is this:

On the 12th he was starting to have this nagging cough that kept waking him up and bothering him anytime he laid down.  This went on for about two weeks and he finally went to the Dr. He told him he had a “viral infection” in his lower throat, (where John was telling him all the clogged up feeling was). How he determined it was viral and not bacterial or well, anything else is beyond me, but whatever.

The dumbass doctor prescribed Cipro, an antibiotic.  Apparently no one ever told him in med school that antibiotics don’t work on viruses.  Anyway, John took it faithfully since we really didn’t know what was the matter and he was getting no sleep at all at this point.  Literally.

Fast forward to today and we have gone round and round with the stupid doctor’s office about all the problems he’s been having and, mostly, the fact that he is feeling a tad crazy due to the fact that in the past two weeks he’s probably had 7 or 8 hours sleep, total.  And I am talking not more than 15 to 30 minutes at a time.  The doctors wouldn’t call us back for a couple of days since, apparently, lack of sleep is not on their emergency call back criteria list.  I was also telling them that he was having anxiety attacks because I didn’t know what else to call it.  He would all of the sudden start hyperventilating and couldn’t catch his breath.  For no reason.  At all.  Apparently me just calling it an anxiety attack threw them off and they thought I was trying to invent problems for him or something.

Finally this evening I called and left another message saying that his ankles and lower legs are swollen huge, he is having a hard time catching his breath and his heart is racing in addition to the chronic cough that he has had for ALMOST THREE WEEKS NOW and I don’t know what to make of it.  Apparently this red flagged some little pea brain there and I got a call from one of the doctors who said to take him to the ER or to the clinic.

I glanced at the clock and it was 4:30.  They close at 4:30.  So what does he have in mind?  Tomorrow morning at 9:30 they will “squeeze him in”.  If he has ANY changes for the worse during the night go immediately to the ER.

Of course he went back to work today and is doing the late shift.  He is supposed to be home early.  I am just so worried.

Look at the first thing that came up when Kessa entered in some of his symptoms, swollen ankles and legs, persistent cough, swollen belly, shortness of breath.

I will just add an amendment to this post when we get back and settled in tomorrow and update you guys on what happened.  I am wigging out right now and am done with crying, cause, after all what my aunt Minnette said is true, it makes you nose snotty, eyes red and your head hurt, so the tears didn’t last too long.  I’m just so scared.

God, if you people can understand how tired I am you will go easy on me for having such a boring, long-winded, HalfAssed post that can only be made better by the assurance that I am about to go and get into a bath that I NEED.  BADLY.  I smell a bit… just Assed, no Half about it.

Yes, that’s what I am going to do for YOU right now.  No reason to feel shame for me in public any longer.  I promise I will be clean and fresh and even change the sheets when I get out.  I love you that much.

We are back from the Dr. and he was sitting up paying attention this time.  Indeed, I believe he begged for a treat before we left.  He listened to John’s chest, front and back, heart, etc. just as he had before, only this time he said he could hear that John wasn’t getting  a “good sounding breath”.  He was also concerned about the extra 7 lbs that John had put on in the past 5 days.  All fluid retention, and he’s not even on his period. (Weak attempt at humor)

Took an Xray and gave a couple of vials of blood.  Then, while we were waiting for him to come in I leaned over and looked at the film the radiologist had thrown up.  I was a bit floored. 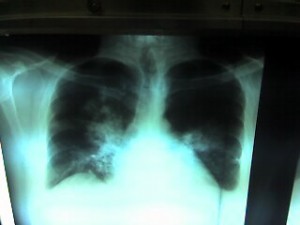 I don’t know how much you can tell from John’s cell phone picture, (they looked much whiter in person), I forgot my camera at home.  All the cloudy white stuff, especially on the left side, (John’s right), is “mysterious”.  He said that there is fluid sitting in the bottom of the lungs and you could see it in person, but he’s not too sure what all the other white masses are.  He wanted a cat scan ASAP and sent us down the street to an imaging place to do that.  Poor John had to lie down to run through the tube thing and hold his breath, over and over again.  He was coughing so hard when we left I thought he was for sure just gonna cough one of those bad boys up and I could get a first hand look at whatever was in them.

The radiologist stuck his head out of the door when we were leaving and said he was going to be calling the doctor within two hours.  The doctor will be calling today.  If for no other reason than to prescribe steroids for the mess that we already know about.

I would like to say at this point that John does not and never has smoked.  His dad smoked until John was about 10 years old and then quit.  Other than that he has been in smoke free environments his whole life.

So Krissa, what does this mean?  I dunno.  You tell me.  I will get back as soon as I know something.

Filed under: John is sick.