Well, I’ve been gone to Mither’s and Pop’s house for quite a while and thought I’d better sit down and let everyone know that’s why I haven’t been answering my phone at home updating as often as I should be.

Don’t laugh.  At least this week I have an excuse!  But, I’m back home now and trying to be a responsible blogger person.

I arrived last Friday, August 28 and my brother, Cam, sister-in-law, the lovely Melissa and nephew, NOAH, flew in from Italy via Germany with a layover in D.C. to DFW on Monday.

I went with Pop to go and get them from the airport.  It really did work out great cause he just sat in the pickup at the curb while I ran in and waited for them.  They showed up a  few minutes early, immediately found their luggage and we shagged out of there, lickity-split.  One of my all time best airport pick ups.  Oh, and no traffic to speak of on the way there or back home.  Gotta love it.

We’ve been having all kinds of fun.  There has been target practice out at Grimy Gulch, (Pop’s gun range off down on the lower 40),  where Noah honed his shooting skills, riding around in LGT, (that’s what we call the Little Green Truck), it’s kinda like a golf cart, ‘cept it’s gas powered and goes like lightening.  Noah, who will be TEN YEARS OLD on the 25th of this month does love to drive LGT.  I guess that’s a given for any ten year old boy.

Anyway, there was lots of outside action.  Noah has been living in an apartment with his mom and dad for almost two years and couldn’t just run outside and play in a yard anytime he wanted to, so the impending move back to the states is highly exciting  for that reason as well as many others.  They are relocating to Alamogordo, New Mexico where Cam is now stationed.  The whole family, with the exception of me *sniff sniff*, is going to drive there next week and start looking for a house for them.  I love, above all things, house hunting.  Especially when it’s for someone else and I don’t feel the pressure of it all.  Oh well, I have made them promise to send me pictures of everything they look at.

Here’s Cam and Noah working out an advanced physics problem on the computer.  OK, maybe not, but looking at their faces, you can almost imagine it… 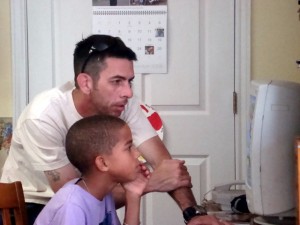 This is my dear, sweet sister-in-law, Melissa.  She is a saint.  She married my brother and STAYED THAT WAY FOR FOURTEEN YEARS.  She’s not wearing any of her valor medals today, but she has them, I’m telling you, she has them! 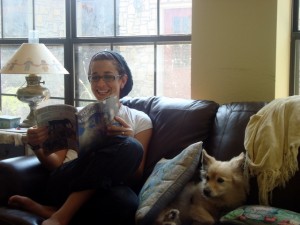 And here’s Mither!  She is wonderful!  She will probably never get voted off the island.  At least this is my prediction… we could ask Witchypoo, but I’m betting she would agree with me. 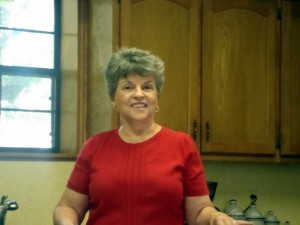 Speaking of Mither, yes, she looks delightful enough, but from time to time she shows a contrary side.  We just let this slide and put up with it cause she has been hanging with the family for…. gosh, my whole life. 😉

Anyway, what was I saying?  Oh, yeah.  Last time I was there visiting I had, of course, brought my favorite shirt and was sporting it one day and she gave me the squint eye and mentioned that there were some small holes in the front of it.

Well, yeah.  But it IS my favorite shirt.

So this time when I went back and stayed for ELEVEN DAYS, (fo’ sho’ the longest I have ever stayed away from the H-ster so far, more about that some other time), eventually, I donned the fav shirt.  Mither was a bit aghast that it had some rather larger holes this time.  As a matter of fact she came at me trying to poke her pinky finger in them and I ran, afeared for my shirt, of course.

This got me a little huffy with her and I told her that she was just scared that when we go out in public I will run around announcing that, “I am Kerry Wilde’s daughter and I have holes in my shirt!”

She, foolishly, laughed at me.  Can you see where this is going?  Cause she seemed a tad surprised.

We then proceeded to Beall’s Department Store and I started to look for a new favorite shirt.  I am convinced I have still not found it even though there are some new serious contenders.

Momentarily we, of course, ran into some people she knows.  I mean, it’s a small town and she and Pop grew up there, what are the chances we wouldn’t?  I’d say slim.

She proceeded to introduce me cause I came sashaying over as soon as I spied her talking to someone.  Oh yes, I had an agenda.

I took the lady’s hand and shook it firmly and announced, “Hi!  I’m Kerry Wilde’s daughter and I have holes in my shirt!”.  I threw in a charming smile of course, and this elicited a confused, yet charmed, look from my new friend.   Mither died laughing and began to explain me.  Soooo much of her life has been dedicated to explaining me….

But I bet she will be less critical of my clothing.