I have me some awesome aunts.  I have the aunts everybody else wishes they had.  But the kicker is that my aunt’s domiciles represent their awesomeness perfectly.  I will now take you, my lucky readers, on a tour of one aunt’s place and later I will have a part 2 installment of the other one’s.

My mither’s sister, Merrinette, (I call her Minnette and have since I was a wee, small child), lives in Burleson, Texas and is a Maine Coon cat breeder.  She has Maine Coon’s running all over the place at her house.  Litters of kittens behind every door.  Well, not really, but she does have lots of the beautiful cats and does a booming business.  Take a look at her beauties at Amerrykoon Cattery!

Her husband and my uncle, Ray, has been building pools for hundreds of years.  HUNDREDS, I TELL YOU.  Here are some shots of their domicile and, mostly, the area outside where everybody stays.  You will see why everyone wants to stay outside around the pool soon enough.  His crew and designers are the best in the biz.  Take a look at SunRay Pools!

My Minnette and Mither and I were sitting around eating lunch on her birthday the last time I was up there and somebody said something like, “…doesn’t that just make you want to cry?”, something to that effect.  Minnette immediately said, “I don’t believe in crying-it makes your nose snotty and your head hurt.  I’ve given it up.”  There was a pause and she said, “Unless it’s something that Ray can fix…”.

She also said that, “There’s a very fine line between stupid and stupendous.”.  Not too sure what that means in day to day life, but I am certain it is true often enough.  I wish I could remember what we were talking about when she said it.

Now, on with the tour!

We had so much fun the last time we were there, stories are still being told… 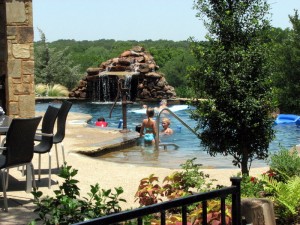 They have a newish salt water pool that is a wonder to behold.  It is the most fun you can have in a Texas summer, that’s for sure!

The problem is in trying to get the entire thing in one shot.  Impossible.  Unless someone flies over, I guess.  Soooo, I had Minnette send me some shots they had a professional do for advertising purposes with the pool business.

Here are her pics: 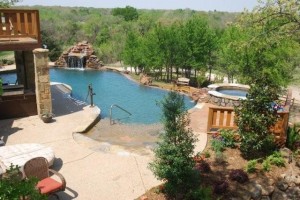 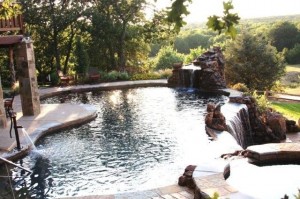 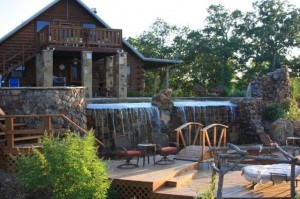 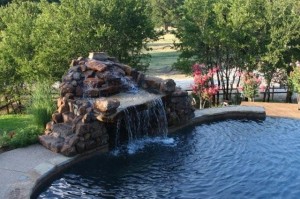 There’s a little grotto under the diving platform waterfall.  It has a seat and you can just sit in there and watch everything going on through a wall of water.

There are also some beautiful shots of the Koi pond that I would love to show you, however, while they were taken at the same time and downloaded the same way and transferred using the same magic dust, they, for some unknown reason, are too big to put in the post.  Actually they’re not.  I looked at them.  But their file size if different for some reason that alludes me.  You’re just going to have to trust me that the fish are beautiful and there are floating lilies and flowers and serenity and you just have to watch out not to get splashed by the kids leaping into the pool. 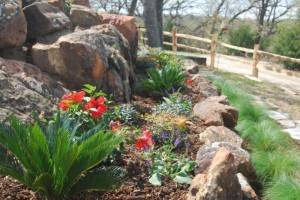 This is some of the landscaping over behind the edge of the pool on the far end. 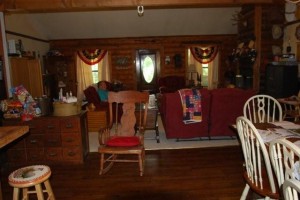 Here we have the inside of Minnette’s and Ray’s house.  Looking from back kinda close to the back door towards the front, through the dining area and living room.  It’s a really beautiful log house that is decorated Texan/Americana top to bottom. 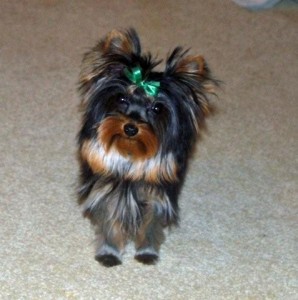 And finally…  You know how everything is bigger in Texas?  Weeeeell, this little gal is named Itsy Bitsy.  She is grown and is now pushing three pounds dripping wet.  She stands about 5″ tall at the shoulder and is just as sweet as can be.   She barks, but the last time I was there, anyway, you couldn’t really hear anything much when she did it.  Just had to pay very close attention to her to see if she was saying anything at all. She is a toy Yorkie.  You know, one of those dust mop dogs, only there’s not nearly enough dog to complete an entire dust mop.  Maybe a dust cloth…

I am told she loves Vienna Sausages and she is most definitely Minnette and Ray’s pride and joy.   She has a very big heart.  One the size of… Texas.♥