Well, I have to say it’s hard to call this guy and his fat chick, sidekick “stupid” just yet.  They STILL aren’t caught.  This has been going on for months and John is at his wits end, with them AND the League City cops.

My dear husband was recently moved from the store in League City, (literally less than 5 minutes from our house), to a store in Pearland, ( a good 45 minute drive).  But for at least two months before he was transferred they were having a really, really bad problem with some guy and his fat wife or girlfriend coming in and filling a basket with boxes of frozen crab legs and walking out the door like they owned the place.  John decided early on that the door they were entering and leaving through, (they were caught on camera over and over), would be altered so that customers could only enter through it and would have to go out through the other door, over by the checkers.  I know that sounds bizarre, but this store he was at is huge like you wouldn’t believe.

Well, the guy adapted pretty quick.  They figured out, with the help of the cameras, that he was getting a basket of the crab legs and/or steaks and hanging out on an isle watching until somebody came in triggering the door to open and he would break for it.  This happened two to three times a week to the tune of $500.00 to $600.00 a time.

We struggled with lots of different ideas about how to stop them.  Security tags didn’t work. (He just kept going and threw everything in the awaiting get away car before anyone ever moved to respond.)  I wanted them to just pay someone to sit down low behind one of the meat counters at the back of the store and do nothing but watch the frozen crab legs case.  But where no one could see him and when the guy showed up and started filling his basket, it would be pretty obvious who it was and he could call John’s cell phone.  There would be a warm reception waiting for him at the door.  John liked this idea and pitched it to his boss.  The poor little man is a tad shortsighted and said that it would “cost too much money to pay someone to sit and do nothing but watch the crab legs case”.  Of course he would only have to have someone do it for a couple of days, at the most, but oh well.

John found out on a Friday that he was going to be moving to the new store on a Monday.  The one thing that we were very despondent about was that the Krab Leg Killer Thief was still on the loose.   John and I talked about how to catch him almost every day.  He thought he could probably ID him if he saw him, but he wasn’t sure.  The video surveillance footage looks horrible.  Once someone is caught it’s possible to ID them looking at it, but recognizing someone from on of the pics is unlikely.

John went in to work on his last day, Sunday and texted me later in the day saying, “Very busy.  With cops.”.  I didn’t think too much of it as they’re always having to have cops in for one shoplifter or another.

Then.  He called me in a few hours and told me that he had been about to re-enter the store and saw a guy, exiting with crab legs and steaks piled up in a basket.  No grocery sacks.  He walked up to him and asked if he had a receipt for the items, (knowing that of course he didn’t).  The man said his wife did and she was still in the store.  John said, “OK, lets go see her.”  He grabbed the basket and the guy took off running.  He ran to an outer edge of the parking lot where he jumped into his car and went screaming out of the lot.  There was an EMS person who was there and he radioed for the cops, but, obviously they were too late to catch him.  One of the other store employees was close enough to get his license plate number and he gave it to the police.

Fast forward about a week and John was here in the Dickinson store parking lot.  He had just gone up there to pick up some groceries.  The guy was parked in front of the liquor store next to the grocery store in the shopping center.  He saw John get out of his car and he freaked out and went speeding out of the parking lot.  John jumped back in the car and started to follow him.  The guy drove like a maniac, against traffic and cutting people off and basically reckless trying to get away.  Which he did.

THEN, in another week or two, John saw him again parked out in the same spot right next to the Dickinson store and he was just sitting there waiting for his wife/girlfriend to come out with the stolen goods.  He saw John and took off again.  This time he didn’t get any of the product.  He took off down the freeway and John was in hot pursuit.  The guy went up to the next exit and took it.  John was already on the phone with the people at the store and telling them that there was a fat woman in there with a basket of crab legs and steaks and they needed to go and find her.

The dumbasses said, “Uh… nooooo.  We don’t have any of that over here…”  The guy finally lost John, (who was about to run out of gas), and so he headed back to Dickinson.  When he got back the guy was already there in the parking lot and apparently he had called his chick and told her to dump and run.  She was getting in the car.  He looked like he had seen a ghost when he saw John and went hauling ass out of the parking lot AGAIN.

This time he went under the freeway and up the service road.  The idiot made a desperate attempt at losing John by turning down the road that leads to our subdivision.  In short order he saw the dead end sign down at the end of the road, and he neatly turned off into one of the two ways in and out of the neighborhood.   He had clearly never been here before.  John parked on the road, between the two entrances and waited for him.  In about five minutes he came driving up to the stop sign and looked both ways, (Acting like a responsible driver!).  He then saw John sitting there and promptly shit his pants went white as a sheet and took off again.

John, (who is afraid of no man), does so badly not want to get our car, (which is paid for), in any wrecks.  (Can you say only liability insurance?)

As far as I know the stupid League City cops who have plenty to charge the guy with still haven’t bothered to pick him up.  If they even know where to find him.  I am assuming the license plate registration is for somewhere he no longer resides.

Bottom line be on the look out for a dark green ’93 Ford Explorer.

When he got back to the store John walked around and found the abandoned cart on aisle 2.  This time it looks like it was only steaks and ribs… 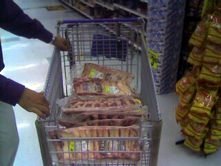 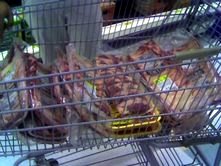