She'd never make it as a maid.

Kessa and Keelan were sitting at the breakfast table working on some scrap-booking project that has been in the works for days.  I had finished sweeping and was running my new Haan Steam Mop around on the tile, as I had just finished doing the living room.  They were talking kind of low and I wasn’t really paying any attention to them when I heard gales of laughter and Keelan saying, “Tell Mom!  Tell Mom!”  Kessa was having a hard time finding her voice she was laughing so hard but managed to shake her head vehemently.

Then, she managed to pull herself together enough to look at me and say, “The other day I took that thing, (referring to the steam mop), upstairs and tried to vacuum with it.”  She had the decency to look a bit embarrassed as her sister and I burst into fresh gales of laughter.  I told her that I didn’t know whether to be proud of her for voluntarily cleaning up there or disturbed by her lack of knowledge of the household cleaning appliances.

Oh, she said it did NOT vacuum well at all. 😉 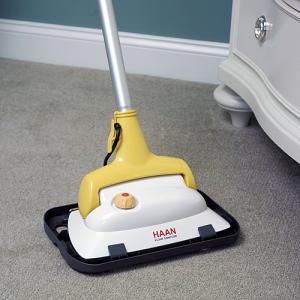