How to put this…?

Several times in the past few months there has been a little… eh, afternoon delight going on in the HalfAsstic boudoir when, WITH NO WARNING WHATSOEVER, there has been a knock on the door.  Or worse, a rattling of the doorknob.  (Which is always locked because hey, we may be naive enough to think that we can actually get amorous while the others in this house are awake, but we’re not totally storybook-stupid.)  And then there’s always the ubiquitous ringing of the damn bell from Henrietta, but there’s nothing to be done about that.

Aaanywaaaay, over a month ago I told Lisa that we had a Lucy and Ethel mission to go on that would only rate a 1 on the five star Lucy and Ethel Absurdity Scale, yet, it needed to be done.

Nay, it MUST BE DONE.

I could tell that she felt like I might be just wasting her time with a measly one star mission, but, in true BFF fashion she jumped on board.  When I explained the situation and what needed to be done to remedy it there was no question.  Appropriate measures would need to be taken.

My first instinct was to head to the local Motel 6 and just steal one off any old random doorknob.  Lisa would be the “get away driver”.  (Like I said, a dismal 1 on The Scale.)

Before any of this could happen Lisa left on a cruise with a few family members.  Her aunt knew about what I was in need of and though about me while on the ship.  Lisa returned with the very best “I went on vacation and you got stuck here changing shitty diapers and hauling an old lady around gift” ever.  For me anyway. 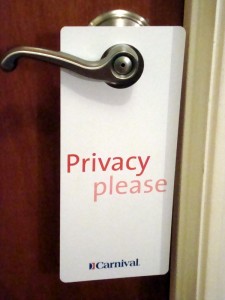