Urine for it now.

Not really.  I was just really trying hard to be clever.  Relax.  It’s passed.

Monday morning, 4 AMish, H rang the bell and I went in to see what was up.  She was having a very bad anxiety attack, with her whole body shaking violently.  She has done this a good many times before so it was easy for me to recognize.  Like always she insisted she was having a heart attack.  (I am assuming she always thinks this because her accelerated heartbeat.)  I assured her it wasn’t a heart attack and went and got her an Ativan.

She ate it and I sat there with her for about 10 to 15 minutes while it took affect and she stopped shaking and went to sleep.

Monday about noon I went in to wake her up and see how she was feeling.  Her speech was slurred and, what I could understand wasn’t quite making sense.  The catheter bag was full of darkish, cloudy urine.  (Though, not the dark pumpkin colored pee from yesterday.)

I called the EMT’s.  (Pay close attention, SSG), They sent out a couple of them and one was entirely too cute.  They gave her the once over and announced that she has a urinary tract infection.

So they hauled her bony butt to hospital and I rode up front and this was about 2:00 PM.  Last night at one in the freakin’ AM, John and I left her there in the ER, because they promised she was about to be put in room 428 and she had finally gotten some antibiotics about midnight.  John was dead on his feet and I was in no mood to be expected to be nice to anyone.  John and I had just had a big, whispered fight in the ER exam room while H dozed off and on and I didn’t want anyone else to have to be admitted. (John)

*side note: whispered fighting is harder than it should be.  Avoid this at all costs in future.*

So there it is.  I will be off to see her here in a little bit when Kes drops me off at the hospital and I will stay until John gets off work at 8:00 or 9:00 tonight.

Here are a few pics of Henrietta, cute EMT/firefighter (BONUS!), oh, and John. 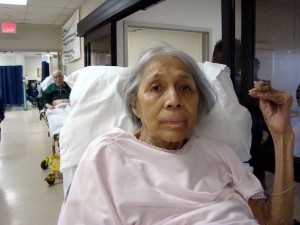 Henrietta’s not too happy to be here.  Must have asked me a million times when she was going to be put in a room.  LIKE I KNEW. 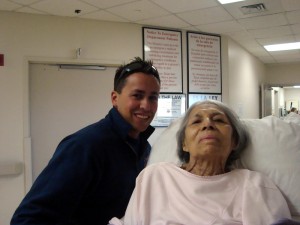 Here she is trying to muster up the strength to flirt  with this cute EMT.  This is NOT something that is beneath her. 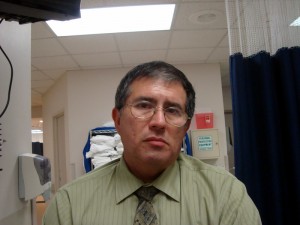 And finally, John after being up for the last 20 hours.  Literally.  He’s tired.  And we’re both feeling poopy.  Spell check says I misspelled poopy.  Clearly, they don’t know us.

Don’t forget to go here and do the unconscious mutterings thing to be entered in my giveaway!

Filed under: Apocalypse, CONTEST, Henrietta, Kessa, Like a game show but without good prizes, Pee