Remember this, yesterday-when I managed to lose my mind phone and was lamenting how I had searched high and low, never finding it?  Well, guess who commented and then sent me subsequent emails telling me where to look to find it?

She told me to, “Look within, or under, an unmade bed.”  So I responded by saying something to the effect that I was shocked that she thought I would have unmade beds.  She pointed out that I have teenagers and that, of course, means unmade beds.   *sigh* She is right.

At this point I still wasn’t thinking about the psychic thing.  I was still just, “Oh she must have found something she lost in the bed and that really is a good place to look…”

So we emailed back and forth several times and she finally just kicked me in the butt told me that the “coverlet is turned back and the phone is right under the edge of it, close to the pillow”.

So I got my happy ass up and went first into H’s room and patted around on her bed and wasn’t really even thinking about the fact that she had given me a “seeing” tip.  Oh, and Henrietta was IN the bed when I was looking around, so OF COURSE IT WAS UNMADE… I mean I am not a complete slob, so I am sure it would  have been made if she hadn’t been in it.

At the foot of her bed is a coverlet/large throw thing that we always keep there for her in case she gets cold.  It is folded in half across the end of the bed.  I patted the thing down and, well, there it was.  Right there, just a few inches in, right at the edge.  So I immediately picked it up and went back in to re-read her last email.   It said it was “close to the pillow.”  Well, the coverlet was over the end of the bed not close to the head.  But look!  You can see in this picture that there is a stack of pillows in the seat of the chair that is pushed up to the end of the bed. 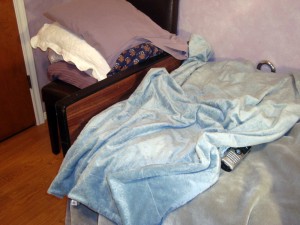 Now, granted I put the phone back in the bed to take the picture, but that is almost exactly where it was, but the coverlet was pulled over it of course and I couldn’t see it.  (I’m not that lame.  I would have already found it if it had been lying out on the bed!  OH, YES, I WOULD!)  Anyway, see the stack of pillows in the chair that I still haven’t found anything to do with since she got the *&%$#! hospital bed?  They are about two feet from the phone.

So I would say that is pretty dead on accurate. I was amazed.  That was one of the neatest things to happen to me in a long time.  And not just because being without the extra phone was such a hassle.  It was just super neat.

That Witchypoo is amazing AND FABULOUS!  Yes, I said FABULOUS!

Amended to add that I forgot to point out that the coverlet is always folded in half, “turned back” as it was indicated.  And while it is kinda messy in the pic it is turned back on itself…  Completely in half.