You know how it is when people are waiting to see something that you are responsible for showing them and you show up and give it to them and everyone is like, “What?  That’s IT?  That’s ALL?  That’s all you’ve got?” ?  And there are some disgusted looks and rude remarks about your being incompetent and how you talk a good game but don’t deliver and let downs and rude assumptions about your parentage…

Well, don’t worry.  I’ve got pictures.  Just not a lot of them.  And it’s not cause John wouldn’t let me, either.  It’s mostly because there just didn’t seem to be any time.

Yesterday afternoon the lady throwing the shindig at her house, next door, came over and told me that it wasn’t going to start until 8:00 instead of 7:00.  At the time I thought this was a good thing since John is having to work such long days right now and is getting in so late in general.  It would make it easier for him to finish up at work and make it on time.  Well, he barely did.  I was all ready to go and I threw him together and we took off for next door.  The party went on till after 1:00 AM, people.  We sat around the table and discussed our theories of who did what and played our roles and it really was fun but, by the end, everyone was stifling yawns.  And poor John had gotten up at 5:30 AM and had to do it again this morning along with having an incredibly busy day with it being Superbowl Sunday.

In the end, NOBODY guessed the murderer.  Out of 20 people.  NOBODY.  So the person who was throwing it, pulled a name out of a bowl and it was Cesar.  I screamed out that it was rigged and I wanted a recount.  Cesar issued a warrant for my arrest and,  eventually, when I reached “trial”, he sentenced me to be beheaded.  Luckily the party ended soon and I escaped with my head.  (Lucky?  Whatever.) 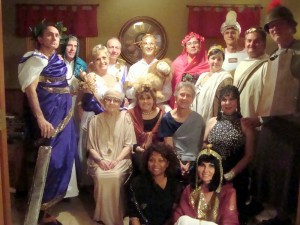 Here’s the group of us.  John is the pretty, tall woman in the pink organza veil in the back.  I am the proud Roman Senator oozing testosterone and struggling not to adjust my crotch while the picture is being snapped, standing in front of him to the right a tad.

I would like to point out here that John started out with false eyelashes that had glitter on them and you can maybe see the bunch of grapes hanging around his neck on a gold cord?  Yeah, there were two of them, strategically placed so that he had fruit hanging in front of each “boob”.  I can’t tell you how many times I had to snap at men there to keep their hands off his, (I mean her)  melons, er, I mean grapes.  I mean you’d be surprised how hard it is to look after the virtue of a Vestal Virgin.  Repeatedly, I had to tell people to keep their hands off him her.  She was so cute and coy, blushing and batting her eyelashes when I slapped her on the butt…  I told her that I’d take her home with me and show her my etchings. 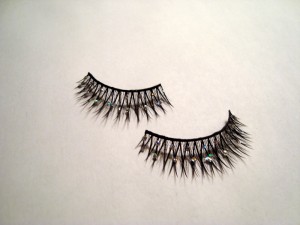 John’s glittered eyelashes…  He didn’t keep them on very long.  About two hours into the party he said they were bugging him too much and he snatched them off.  There was disappointment from all the men in the room who had told him he “looked pretty”.  And, frankly, I think some of the women were jealous. 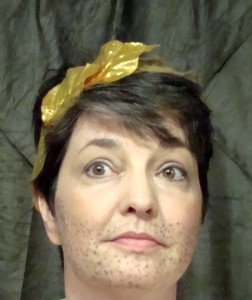 Clearly, I need a shave.  But I think the most disturbing thing is how BIG some of my hair follicles are.  There’s something strange going on here…  I don’t know why they aren’t all showing up on my upper lip.  I had it there just as heavy, OR, maybe I wasn’t done with the application when I took this.  I don’t remember.

And remember that UTI that I so lovingly shared about with you, yesterday?  Yeah.  Still haven’t gotten a thank you card for that and I am considering holding my breath till I do.  I’m just saying…

Well to show what kind of a good sport I am, I am including a gratuitous shot of the full catheter bag this morning.

I have two immediate emotions here: 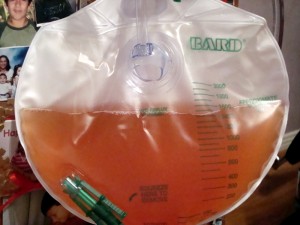 Crap.  It looks like…. pumpkin juice?  Now, do you really think she’s going to be able to wait until Tuesday or Wednesday when the analysis is back and the Dr. gets around to prescribing an antibiotic?  I bet she’s in the hospital by tomorrow or Tuesday…