It is raining shit up in here!

This morning long before H was up the nurse called and said she was bringing by some supplies for me and doing a “supervisory visit”.  Well, this is all new to me.  I told her that the other nurse was just out here day before yesterday and they only come about once a month, unless there is something wrong and I call them.  She was surprised and said she was just supposed to bring by some supplies anyway.  I couldn’t imagine what, but told her to come on along.

She showed up in a few minutes and went on in to wake up and see H.  I went about my business and saw no reason to go in as there was no need for me to stand and scream what the nurse was saying at H because the nurse is too lazy to raise her voice and do it herself interpretation.  Sometimes Henrietta is having a particular complaint that she wants to address and so I go in and relay the answers back to her, but not today.  Not that I knew of.

She stayed back there talking to her, taking her vitals and getting information about the frequency, size, shape, color, smell and over all IQ of her stools.  I know this because the neighbors at the end of the street could hear her screaming the questions.  When every last bit of info about the poo, (classified and otherwise), was gathered.  She emerged victorious and held out two plastic bags to me proudly saying, “Here, I brought you supplies.”

Does it make me a bad person that my gut instinct, first response was, “You got booze in there?”

I took the bags and judged by weight and size of the bulges that there were several catheters, a box of latex gloves, and about 3 sterile catheter kits.

The latex gloves were a bit of a surprise and I am guessing the nice lady in the office, Paula had included them for me as that’s not part of the deal.  We are expected to buy our own gloves and I go through a shitload of them.  Hahaha!  Did you see what I did there?  I use the gloves to change shitty diapers and empty bedpans and I said I go through a shitload of them!  Hahahaha!  OK, maybe the shit jokes are a bit dense around here, but so is the shit.  (I bet that nurse didn’t even ask about density….)

Then the nurse leaves and almost immediately Henrietta rings the bell.  I go to see what’s up and am a bit surprised she rang and I hadn’t had time to get her breakfast in to her yet.

“Krissa, I hate to tell you this, but I have a dirty diaper.  That stuff just came out all of the sudden!”

It’s always called “that stuff”.  She has never referred to the poo as anything other than “stuff” once it has happened.

I must admit it helps to think of it this way…

So I assure her that it’s all OK and we set about the business of cleaning it up.  I see fairly soon that the reason she was so unaware of the situation is that it’s very loose.  (Am I getting too graphic, yet?  Cause I don’t mean to be, but really… YOU weren’t here cleaning this old lady’s butt up and changing gloves and swiping her with the required lotion.  SO DON’T JUDGE.)

We got done with that and I brought her the first course.  Oatmeal with a few cut up prunes and a dose of Miralax. 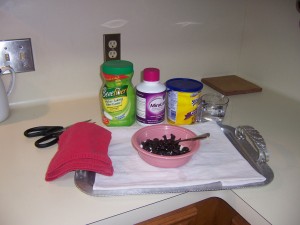 Now I know what you’re thinking.  Why would Krissa give H the Miralax if she just had a U. P. that was loose?

Well, my pretties, it’s like this.  It doesn’t matter what I do.  I’m screwed.

I have tried cutting off the fiber and shit-making producers as soon as there is any kind of disturbance in the digestive-go-about before.  It is all for not.  There would be an Abrupt Poop Stoppage and massive discomfort.

So we don’t do that anymore.  I mean the APS wouldn’t happen until the next day, but it WOULD happen.

Aaaaanywaaaay, I got her all cleaned and lotioned up and she has the rest of her breakfast.  An egg, breakfast sausage and an oven roll with a bit of jelly.   Of course, the U.P. has set her off her game and she prefers to stay in bed for the rest of the day.

A few hours later she rings for me to come in there and she has had another poopy diaper.

Well, shit.  I am just elbow deep in it today.

The day progresses and eventually I bring her in her supper.  (She never eats lunch and considering she doesn’t get up until noon, I can pretty much see why.

Remember she is being sickly today and playing it up big time.  No other complaints other than she is poopy.  Literally.  She wonders aloud numerous times what is the matter with the poops and why “all that stuff just keeps coming out…”.  I clearly have no new answers and have told her repeatedly that it’s OK.  Nothing to worry about.  Same ol’ same ol’…

Well, tonight I took her in the loaded toothbrush, fresh water, her two pills and a napkin and spit bowl.  She told me that when she was coughing during her soup she may have messed up her diaper.

So I peel it all back and there it is.  POOP.  From The Endless Font of Poopage.  AGAIN.

So I changed her again.  And ran like hell.

I want the hell out of here people!  I need a makeover!  WITH NO POOP!  Or even mudpacks, cause I don’t even think I like chocolate anymore due to the color and texture…..