Let it snow, let it snow… you know the rest!

Well, something totally unexpected happened to the small town of Dickinson last night.  Now, keep in mind we live about 20 minutes inland from the Gulf of Mexico.  Or, as we call it, the Gulf Coast.  It’s pretty freakin’ tropical here.  OK, it can be unbearably tropical here.  Humidity hovers at 110% all summer and it’s not uncommon for it to never dip to freezing in the winter.

Now.  Keeping that in mind how often would you think we see snow?  Not often.  The freakiest thing I will ever be able to say about snow down here happened four years ago on Christmas Eve.  That’s right.  We had one of those rare snowfalls that only happens about once every 5 to 7 years and it was on Christmas Eve.  It was so beautiful Christmas morning.  My dear Miter and Pop live up a little bit north of Ft. Worth and get snow, usually every year.  Though, not always a lot of it.  They are both from the small town they live in and have never in their lives had a white Christmas.  It was pretty surreal calling them and telling them we were having one.

Last night it snowed again.  We got a good blanket of it and all my vegetation is bum-fuzzled. 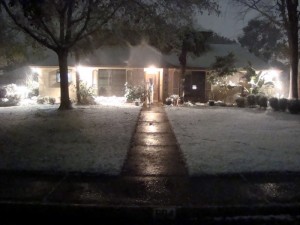 Here’s crazy Kes out on the front porch in her nightgown! She doesn’t mind the cold, I guess… 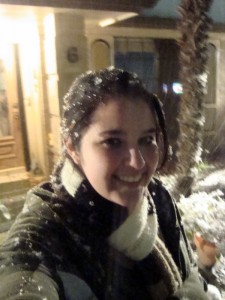 Keelan with a severe case of dandruff… She does not seem to mind, though. 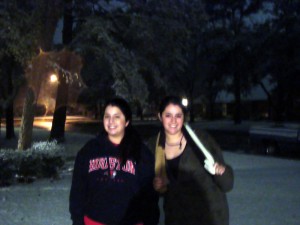 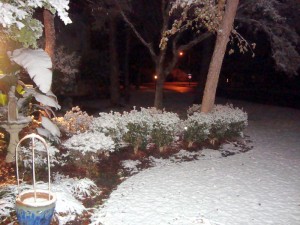 Unhappy bushes covered with white cold stuff.  They all got themselves pulled up and left in the morning, bitching the whole time.  They never did appreciate me… 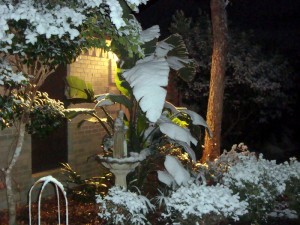 This is my BIRD OF PARADISE.  It is so tropical it could (and does) live in Hawaii.  Only not this one.  It was silently screaming, “Aaaaaahhhh!  Get this cold shit off of me!  I am tropical, dammit!  My best friends are azaleas!  Even St. Francis in the bird bath was cussing…  It was bad.  But very pretty!  And I say that’s what counts!