I’ve taken some pictures of some random things lately that may or may not ever be able to legitimately be worked into a post.

So here’s a… random sampling of life in the armpit of Texas. 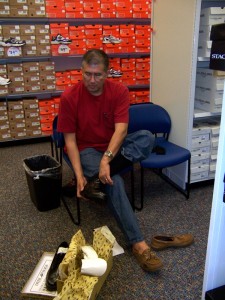 Here’s John trying on shoes at the new Shoe Carnival store that opened up by us.  His dogs were killing him when he came home from work every day and the insides of his other black dress shoes were shot.  All broken down. 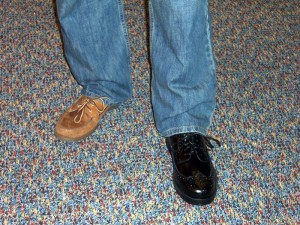 So what do we think? 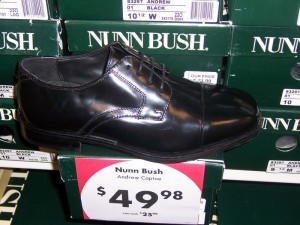 There’s also these Nunn Bush ones that are on sale, too.

Gee, I wonder how many of you were just about to wet your pants in anticipation of that announcement.

OK, where else could such a gripping post go but to a discussion about the… (are you ready for this?), weather.  It hasn’t rained in forever and I know I sound like an 80 year old farmer, but we really do need it bad and it is supposed to be coming here TONIGHT!  Woo-Hoo!  This combined with the fact that it will be coupled with a COLD FRONT is the best news I’ve had lately.

We have been living, (if you can call it that), with the windows open for about 48 hours now.  Henrietta is having a seriously hard time of it.  If you recall, one of the posts after we got electricity back after Ike, (If I was a good posty…postie(?) person I would hunt down a link… but, I’m not.), I explained how she tried to die at the thought of leaving her window open when we had no electricity.  Her room is directly across from ours and we needed the cross ventilation.  She was so opposed to it she told us we were abusing her by making her sleep with her window open.  Yes, we have screens on all of them.

Aaaaaanyway, she has asked me why the air isn’t on when she is in her room because it is freaking hot in there and I have told her it’s not on because it is cool outside and there’s no need for it.  We have the windows open.  If you want it cool in your room we’ll open yours.  I’m not making her do it because we have electricity and a working ceiling fan in our room.  She does, too.  “OOOOH NOOOO, Krissa!  (panic setting into her voice), I don’t want the window open!”  I, very carefully, explained that she didn’t have to, but it would be much cooler and did she want her ceiling fan on?  Now, she has always maintained that the ceiling fan makes her sick.  Or have allergies or constipated or some such shit.  (hehe… constipated or some such shit HA)  But she told me to turn it on low.  I turned it on medium and asked if that was all right and she felt the breeze and decided it felt so much better she’d stick with it.

But then, she started stating her case.

“Why don’t you run the air conditioner, Krissa?”

Because it’s cooler out side than it is in here and it’s free and the light bill is horrible and we are constantly trying to save money and this economy sucks, not to mention it’s the ecological thing to do and, etc. etc. etc.

“But, you know, Krissa you’ve got that chemical plant…”

Blank look Henrietta, we don’t have a chemical plant.  (Much less ME)

Well, hell there are gazillions of chemical plants in Texas City, but somehow I don’t think it will help my case to point that out.

“Yes.  In TEXAS CITY there is a chemical plant…?”

Every time she wants to get her way about something her arguments at one point or another hinges on “Well, I’m old, already.”

She then proceeded to tell me that’s not right to have the windows open because she’s “the patient”.  I looked incredulous and said, “Patient?  You’re not sick.  What’s wrong with you that you think you’re a patient?”

She got a little huffy and I left the room.

But let me tell you one thing.  She rolled her happy ass into the living room where it’s nice and cool shortly thereafter.