NaBloPoMo, birthdays and the best cake recipe EVER

It’s November and it’s National Blog Posting Month, or NaBloPoMo, as everyone is calling it.  I should have mentioned this yesterday on November 1st, but, hey, I’m just unorthodox, non conformist, a freak like that.  So the deal is that if you are going to take up the NaBloPoMo challenge you whip out a post every single day for the whole month.  I’m not sure I can come up with anything good to say, but jabber has always been one of my specialities.

I dunno, people.  John has had two days off in a row and went back to work today and of course the store is a hellhole.  (One of the reasons he hates to be off two days back to back.)  I think his boss really thinks he’s doing him a favor when he does this to his schedule.

I have been discussing the situation with Witchy-poo and she was of the opinion that they were possibly softening him up before sending him to the new, gi-normous, grand opening store.

I don’t think they’re concerned enough about how he feels to bother with softening him up.  This just sounds nothing like them.  His immediate boss is a fairly nice guy, though a bit incompetent.  But the higher up one is a tee-total bitch.  I believe, in my heart of hearts, she is very proud of this.

Kes just came home from work and dashed in to nab my credit card and run out and buy herself some new bras.  She was in worse shape than me, if that’s possible.  (Yes, it is.)  She had only one bra left and recently the underwire broke through and gouged into her boob leaving a nasty puncture wound.  I couldn’t believe it when she showed me the wire.  It was sharp as a needle!  A man must have designed it.

It is now 3:23 and H is pooed and dressed and in the wheel chair.  Except for feeding her, I am done for the day until time to put her to bed.  Unless there is the dreaded U.P. (For those of you so unfortunate you missed a particular explanatory post, this means “unscheduled poop”.  Try to keep up.  There may be a test.)

On October 25th, while my dear Mither and Pop were here, my good friend, Lisa had a birthday and we felt it very necessary to celebrate with great food and even better company.  Here is Lisa blowing out the candles that I lovingly placed on her birthday cake. 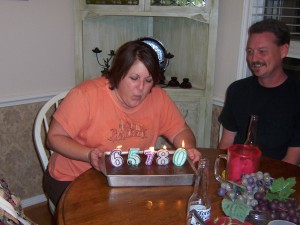 There was some discussion about the actual numerical amount represented by the flaming digits on the cake. 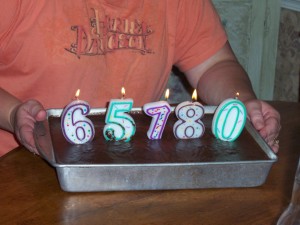 I was concerned that I may have gotten the number wrong because I wasn’t sure if the third candle is a one or a seven.  Lisa was, as usual a good sport about it and insists that when you hit 65,000 whats 600 years give or take?  I guess I can see her point.

You too can achieve this affect if you save every single numerical candle your kids have ever used on a cake.  And it could have been even longer if the cake was bigger!

I am going to call dear Mither and ask her for the recipe for this particular cake and be so generous as to give it to YOU!  It is, really, the very best cake in the world.  Lisa has had it before and she has told me many times that it’s her fav, too.  For a scratch cake it’s really very easy.

It’s supposed to be called Chocolate Sheet Cake, but, it’s known around here as BIRTHDAY CAKE.

Add the following in this order and beat after each:

Bring to a boil:

THAT is the most moist cake I have ever tasted… Moistest?  Moisty?  Moistester?