Last night I informed john that we would need to make something exciting happen tomorrow in order for me to have some sort of reasonable blog fodder.  He immediately responded, “Have sex?”.  I then told him,  1) I don’t usually write about our sex life on my blog and 2) My mother reads this.  His swift, cocky comeback was reduced to, “Ooooh…”.

Today has been a bust.  The caregiver provider was supposed to show up at 1:00 and let John and I run out and madly dash about doing things together willy-nilly until we had exhausted our three hours and had to return to take care of H.  She never showed up.  Now remember, this is the “new” provider that is, not the same one that had trouble showing up a while back.  So I called the number we had for her cell phone and, surprise, surprise, no answer.  I next tried calling the company that was sending her out here.  The lady told me that she had called her and told her that she didn’t feel well and that she had called us and left a message for us telling us that she wasn’t showing up.  Left a message?  Why on earth would she lie and say that?  That makes it sound as if I WAS ABLE TO LEAVE THE HOUSE AND NOT ANSWER THE DAMNED PHONE.  Ahem…  Anyway, there was no message on the answering machine and we had been here all day.  Waiting.  I was not a happy camper.  I told the lady so and she said that maybe I should call the… “provider’s” home number and she gave it to me and, of course, no one answered.  I called the company back and told her I want someone else and it’s not that she was feeling poorly, it’s that she’s a terrible liar and that really chaps me arse.  So tomorrow afternoon some new chick named Maria is supposed to show up and we will see.  John works a half day tomorrow and so we should get to do something.  I have an exciting list, too.  Let’s see… post office, Lowe’s, grocery….oh gawd…

The exciting thing that happened today is that my wonderful husband has figured out how to get the pics in the memory of my camera onto the memory card and onto the pooter.  Actually, I got them onto the pooter, but he did the rest.  He may get some booty tonight…

On Sunday, August 21st, the same day Henrietta came home from the hospital, Kes came running in to get John and I early in the morning.  I mean DAYBREAK.  She had gone out to the garage to investigate what on earth our little dog, Kissy, had been barking at.  It was a stray cat.  Don’t know why the cat decided it wanted in our garage.  There is no food in there or anything like that.  While she was looking at it something flew across the garage and landed, spooking her no end.  It was this little bitty owl.

Now I have quite a history with owls and I will update you on all that in my next post, given something earth shattering doesn’t happen in my life to supersede it, i.e. H has a blowout that completly dissolves a diaper or the provider care person shows up and John and I have sex for three hours in some seedy motel.  Don’t hold your breath, cause H is finished with her antibiotics and is no longer suffering with diarrhea.

I just read this to John and his first response was, “Are you sure your mom can read all that?”  I said, “She knows how to read…anything. ”  He looked a bit desperate and responded, “YOU KNOW WHAT I MEAN!” 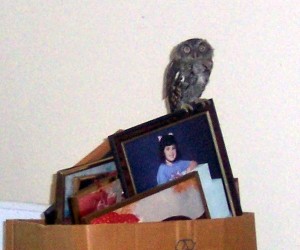 Owl in garage on top of box of old pictures. 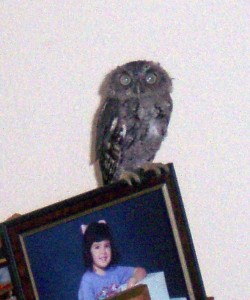 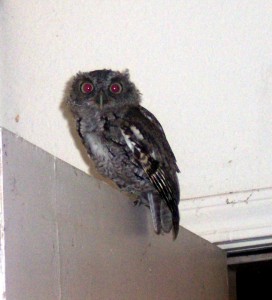 This little guy landed on the door he had flown in through and after he flew around bumping into the ceiling for a while he finally flew out the big two car garage door opening…Which we had opened for him as soon as we went out there.

Is it a baby or just a small breed?  I dunno.  But now that I have the pics on the pooter I will try to look it up.  Tomorrow.  John wants my attention now and I have to go…..