The goings on at chez HalfAsstic

Greetings all.  I am up early this morning with many things on my mind and I am quite sure that it will be this evening before I can make sense of it all enough to get it down in a post.  Then I will re-read it and think, “So why was that so hard to say and why did I think I had so much to say?”  I suppose just because it’s been a while since I was good about keeping up here.  I’m not apologizing, cause shit’s been happening.  And I don’t even meant he bedpan variety.  No.  Real, documented and undocumented, shizzle.

Pop is in the hospital and, actually, is scheduled to get out today.  He told me on the phone yesterday that they told him he could leave this morning so he said he was going to get up at about 3:00am and go.  I told my mom he said that and she laughed and said she hoped he had a ride cause she wasn’t going to get him at 3:00am. He is such a character.

He has emphysema and COPD problems that got a bit of fluid in his lung.  “Pneumonia”, I thought.  “No”, the doctors said, “just some fluid in his lung”.  Huh?  Oh well, my understanding is not pivotal to his outcome, anyway, thank you God.

John got a new boss to work with and it is a vast improvement over the last one.  Oops, he isn’t supposed to be there until Monday, so I suppose that’s jumping the gun.  No it isn’t, cause anything would be an improvement.  Plus he’s worked with this guy before and he’s a pretty good one.  So that’s all good.

Henrietta is getting a new caregiver provider and she starts Tuesday.  They called and asked me if we would mind someone who mostly speaks Spanish and I said no, I didn’t mind and so did H so that’s a go.  As far as I know the hand gestures for indicating you have to poo are a fairly universal thing.  Well, that and H throws in some really good facial expressions leaving no doubt as to the amount of urgency/amount of poo ratio.

Got the first semester bill for older child’s college tuition and that was a nasty little shock.  It was something like $2400.  OK.  Well that sucks.  And that is after her scholarship was deducted.  Shit.  Then a day or two later we got an email saying that there had been an error and everyone had been charged $345. for a…something, can’t remember what they called it, but anyway that was an error and they were going to remove it.  So, OK great.  We looked at her bill and they had deducted the $345. for each of her 4 classes  so that just about halved her bill.  Yea.  Can you say “good news”?  We are college tuition bill virgins, (in this millennium) and had no idea what to expect so we were really anticipating having to spend about two and a half thou on it twice a year.  Next, text books.

And then there is the discussion of the younger daughter moving to Decatur, Texas to live with Nana and Pop for her last year in high school.  Strangely, she wants to do this.  She is disillusioned with her friends right now and hates her job and is worried about Pop and Nana both, mostly because they just plain need help.  Young, limber, strong backed help.  Family help.  Adorable, beloved, grandchild help.  The only thing keeping her from jumping at the first chance of going?  New school.  I really can’t say that I blame her.  I was always adamant that she and her sister never have to change schools if there was anyway we could help it and they never did.  K-12, same school.  I guess I wanted this so badly for them because I have attended 6 different schools in my life.  I didn’t know I was crippling them with an inability to flex and change.   No, I can’t blame her for not wanting to do it.  Very scary stuff, walking into a new school for the first time and trying to find your way around feeling like everyone is staring at you.  The New Kid.

Of course one of the friends she is disillusioned with is out with her right now and they are getting spray tans, eyebrow waxing and manicures.  How really bad could it possible be?

Besides, I am pretty sure she would miss me too much to stay gone for months at a time from me.  Yeah.  That’s the way I am hoping thinking it would go down.

We’re trying to die in this heat.  And not because it’s hot, but because we refuse to be and our light bill is run up to a whopping $600 last month.  NOW we’re being hot because that thermostat is turned way up.  This house is like an oven in the rooms Henrietta is in without the ceiling fans on.  When we are all in the living room and we are getting hot I stand up and turn it on and she looks a bit frantic for a second, (she’s convinced the, “wind will make me sick”), but she doesn’t say anything cause I am fanning my shirt and saying how hot it is.  If I get her a light throw or something to wrap up in she says no, it’s too hot for that, so I know she’s not cold.  Just weird and full of old wives tales.  What can I say, she’s an old wife.

I haven’t been to a movie in years and then about a month or so ago John and I saw the Indiana Jones movie.  Really neat.  Then again, when he was on vacation last week we went to see the new Batman.  Well, Wednesday a good friend of mine came over and we watched The Sisterhood of the Traveling Pants #1 on DVD, and made plans to go and see #2 at theater yesterday.  We really enjoyed it, also.  So I have seen three movies in the past couple of months and before that I bet I hadn’t been in 4 or 5 years.  How weird is that?

While John was on vacation, my brother was home from Italy to visit and finalize the adoption of my brand spanking new nephew.  Older child had to work and could not attend the family reunion, as it were, but younger girl, John and I met up with Nana, Pop and Cam in in a park in the small town of Buffalo, Texas.  We hung out and ate at a near by resturant.  It was good to see him and I never know how long it will be until I can see him again.

Here he is with Keelan. 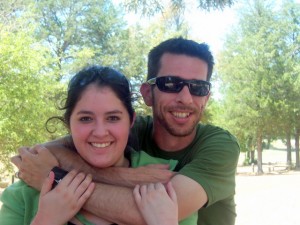