He was sooo perfect for a short while…

Well, I have been taken to task by my itty, bitty, baby brother.  Calling him that made him furious, years and years ago.  I am thinking now, it’s just dandy. Anyway, yesterday was his birthday and I didn’t even mention it.  I DID remember and called him and all that, but, reporting on the U.P. just seemed to be foremost in my thoughts because, I suppose, I felt like I needed to explain, partially, why I hadn’t been keeping up with this blog.  Not that a U.P. is more significant than his birthday, or even an S.P., but over here in this household you just get caught up in all the excitement of the bowel movements.  You understand.  Sure you do. YESTERDAY, baby brother, Cam, turned 37 years old.  I go back and forth between thinking my teenagers are aging me faster and then I think it’s gotta be him.  He will catch up someday, but for now he’s eight years younger. I remember when he was born, and that’s saying a lot because I have very few memories of childhood.  I was roused in the middle of the night and taken to my auntie-poo’s house to stay while Mither and Pop trailed off to the hospital.  I don’t remember visiting in the hospital, but I’m sure I did.  This was back in the day when a 3 day maternity stay was the norm.    When he finally came home I LOVED that baby with an intensity I assumed only a mother could feel.  He was MINE.  I wanted to do everything for him.  Well, almost everything.  I remember him as a toddler so well.  He was adorable.  I took him everywhere I could with me.  We were living in Lafayette, La. and the subdivision we lived in had a local 7-11 store several blocks away.  My friends and I would walk down there regularly.  I dearly loved pulling my little brother behind me in a wagon outfitted with pillows and a blanket if it was cold.  In the store, I always bought him some candy and then we’d set out towards home.  We took baths together and had tons of fun in the bathtub.  I am sure we splashed an entire ocean of water on the floor. Any time he got into trouble and was being punished or scolded, I cried longer and harder than he did.  He called me “Ya-Ya”, and if he was being put in a time out in his room he’d sit in there and call for me until I convinced our mom to let me go in to see him. And then one day, it happened.  He soured for me.  He was no longer The Golden Boy.   I believe he was 4 and I remember telling my mom that “He is SO spoiled!”.  And the funny thing is that I had absolutely NO idea how he got that way.  Mom says he still worshiped me and I just didn’t think any of what he did was acceptable anymore and he was acting like a baby.  He was 4 and he needed to grow up. The problem, I can see as I look back, was not that he was 4 but I was 12 and about to be a teenager.  (Oh Lord, thank you for giving my parents a stalwart nature more suited to an adventurous pioneer and, consequently, the ability to let me live.)  Oops, was I praying?  Er, yeah, sorry ’bout that.  The mention of the word “teenager” frequently brings on an involuntary fervent prayer response. 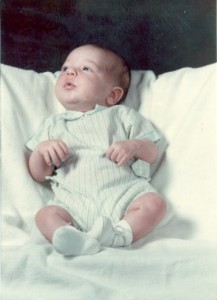 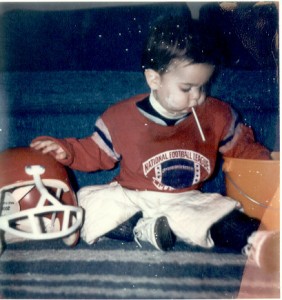 His second Halloween… hard to tell if his cheeks are full of candy or….  No.  He’s just fat. 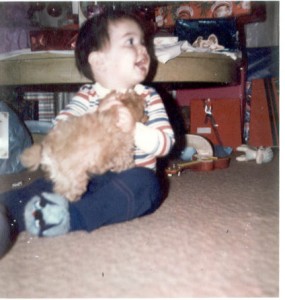 Playing with a puppy at our grandmother’s house. 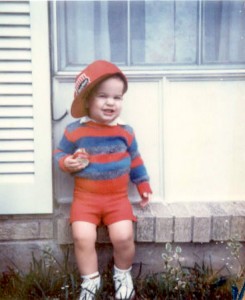 Looking adorable in the backyard at our house. 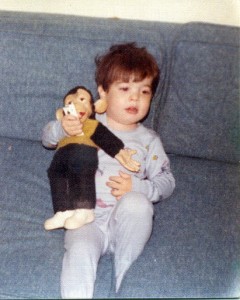 Here he is with “Baby”, his constant companion. 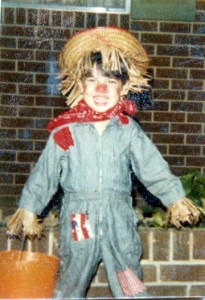 And a scarecrow for his third Halloween. 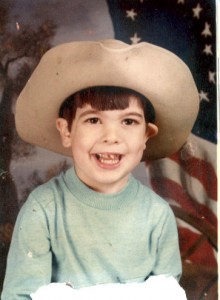 Four years old and for the LONGEST time that hat never left his head.  He even wore it to school everyday in Kindergarten.   He’s snaggletoothed here because I ACCIDENTALLY kicked his tooth out. 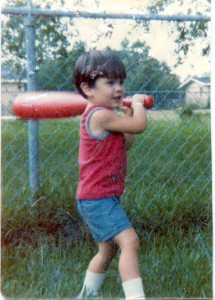 Loved playing anything outside. 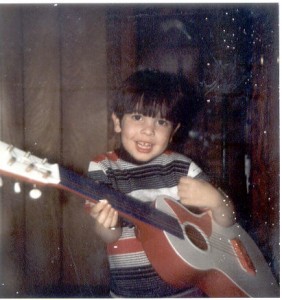 Four or Five years old and was already interested in music.  He now plays a guitar quite well.

Special thanks go to our dear Mither who scanned and sent these pictures after digging through thousands and getting all mired down in “Oooooh LOOK!…AWWWW, he’s soo CUTE!  OH, I’d forgotten all about that!  Look at how sweet!…”