Nope! That’s not a typo! If you have ever seen the play or DVD called Greater Tuna, you’ll know what I mean. This is a HI–sterical act that these two guys do, mostly dressed in drag. They each play a number of different people in a very, small southern town, named Tuna. I believe it is supposed to be in Texas, although I’m not entirely sure about that but it’s fictional. I’ve just forgotten. Anyway, ever since my mom and I first saw it back years ago, I have called her Mither because one of the characters in the thing is a teenage girl that calls her mom Mither. This chick embodies everything that is evil about teenage girls. I cannot begin to tell you how funny this guy is playing this girl. And not because there is a guy playing her. You forget about that almost immediately. But, what happens is priceless. This is my Mother’s Day gift to all of you. you can get it via Netflix and you need it! It will lighten your spirits. I should have watched it a number of times in the past few days. But, hey, I never have been one to listen to my own good advise! 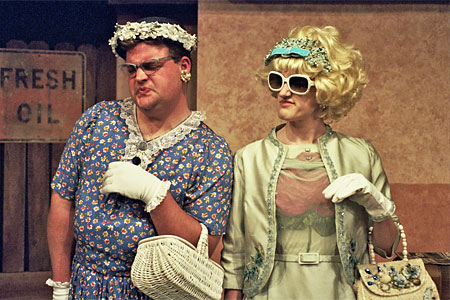 Cast of Greater Tuna in just two of the many characters they play.

Kes just brought in flowers and some clothing for me . I believe her exact words were, “Mom. I got you some clothes.” Picture this with a look on her face like, I am going to break this to you gently, Mom. Then came, “Cause you really need some cute clothes, Mom….Cause yours are… not cute.” I just laughed and she pulled out a trendy little skirt and shirt and I went in and put them on. The skirt is actually a little bit too big, I think, and we will just go back and exchange it. The top fits though, and hey, I have gotten to where I love to try on things and announce that they are too big. “Old age” thing? Probably just “getting fat” thing…

Other child, Keelan, is at work and will do the requisite sucking up as soon as she gets home.

My mom had me when she was 26 years old and married to my natural father. He was an alcoholic and, from all that I have gathered it was a very rough ride. I had an older brother that was killed in a car accident when I was 3 months old and he was 22 months old. My father was driving home drunk from somewhere he had gone with Kurt, my brother in the car with him when he had a wreck and Kurt was killed. My mom ended things then. I think she had been trying to hold everything together for quite a while, but I also think the effort was mostly on her part. Anyhow, she raised me alone until I was 5, when she reconnected with an old friend from her high school days. My daddy. They dated for a while and got married and before the ink was dry on the marriage certificate, he asked me if he could adopt me and I was thrilled. My natural father was out of the picture and I didn’t remember ever seeing him anyway. Not a real stand-up guy. He had never come to see me and wasn’t paying his child support, so it wasn’t hard to get him to agree to give up his rights. An easy out for him.

Sooo we lived quite happily as a family until my bratty baby brother came along when I was 8. Not really. I adored Cam. He was the best thing ever. Until he wasn’t anymore. About 5years old, I think. Then it was pretty typical sibling shenanigans. Mom was thriving as a wife to my dad and a wonderful mother to both of us. She was involved in ALL school functions and charity stuff as often as she could find it to do. Which was all the time. She “adopted” families and was forever looking for things for a family with 7 or 8 children that was about to have a birthday or around Christmas. These people would send wonderful letters that were written at about a 2nd or 3rd grade level and tell her what was going on and what was needed. She kept lists of the children and their sizes in her purse at all times. If there was a sale at a toy or clothing store, she was there with bells on. This mostly all happened while we were living in Louisiana, as we were there for a few years while I was growing up. There was an abundance of poverty there also. This was something she could never turn a blind eye to. My dad made good money and they made drastic home improvements on every house they had ever lived in, (several), and made a good deal of money on each one when they moved out. I learned all about house flipping from my mom long before HGTV. She and my dad are the definition of “handy”. Anyway, “the buck” actually didn’t stop there. It was passed on to those who needed it far worse.

Henrietta’s ringing the bell. Poop! There must be Poop! More later. Remember! She never got one out yesterday, so this is a big event! BIG!