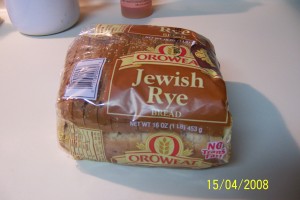 A few days ago John was off work and in charge of the egg and toast portion of Henrietta’s breakfast. He decided to throw her a curve ball, just cause he’s funny that way. Instead of her normal slice of white bread or oven roll with butter and jelly, he gave her a slice of Jewish rye, toasted. Butter and grape jelly. He took her tray into her in bed and left it with her. When I went back in to retrieve the tray and do all the morning stuff he followed me. Henrietta asked what kind of bread that was and commented on how good it was. John couldn’t just tell her “Rye bread.”. He had to say “Jewish rye”. “Oh! Really?” (shock and amazement) “Jewish rye? Ooooh…” At this point I begin to hear the little gears and wheels in her head start up and begin moving faster. By the time we walk out of the room and John has repeated the phrase “Jewish rye” several more times, (always with an evil grin on his face), the squeaking cacophony of rapidly turning thoughts coming from her little head was deafening. She was mumbling under her breath about the “…seeds. I can’t eat seeds… Jewish rye….I can’t be eating that… I’m just too Catholic….”